From Anushka Sharma to Sunny Leone, These Actresses Have Portrayed Ghosts In Horror Movies

Which of the other actresses from the Bollywood industry would you love seeing in a horror role? 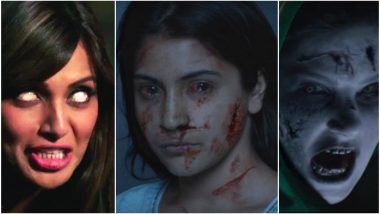 Someone who really loves watching horror genre films will not really be pleased with Bollywood's tryst with the genre. As compared to the Hollywood standards, Bollywood films still need to catch up on the plots and character specifics for a horror film. Be it the lack of resources to get the necessary effects or just a weak story, there are few horror films that have really stood out. But all said and done, in whatever films that have been done, we have had our mainstream characters go out of the way and essay the supernatural characters. Other than doing the normal roles, they have also imbibed the 'ghosts' in them very well. Let us take a look at some of the mainstream actresses who have taken the supernatural role path in their career.

1. Madhubala (Mahal): This movie becomes iconic in itself as it was the first horror film made in Bollywood. Starring Madhubala, the film dealt with the subject of reincarnation and it was spooky enough. She played the role of Kamini and this film turned out to be one for super-stardom for her.

2. Urmila Matondkar (Bhoot): Urmila Matondkar has been a part of many thriller films but in Bhoot she played a possessed woman. She did the strange activities, gave the correct spooky expressions and acted very well for the role. It even gave her criticial appreciation along with Best Actress Awards that year.

3. Bipasha Basu (Alone): Basu is rightly called the queen of horror movies. She has done almost 7 horror films so she exactly knew how to ace the character of playing a ghost too! In the film Alone, she looked great as a terrified as well as the one terrifying the audiences. It was a horror love story of conjoined sisters, both played by the actress. She turned the evil very well.

4. Konkona Sen Sharma (Ek Thi Dayan): Usually seen in very serious and to-the-point roles, Konkona Sen Sharma gave some good spooks in the film Ek Thi Daayan. Unlike other horror characters, she wasn't too excessive on the make-up, her staring wide eyes were also enough. She played a witch in this eerie thriller film.

5. Vidya Balan (Bhool Bhullaiya): Vidya Balan's character of Monjulika is in instant recall even years after the film's release. Compared to other horror films, the plot of Bhool Bhulliya was not as scary but we can't deny the way Vidya pulled off the ghost of the dancer and that one dance performance remains unforgettable. Be it the hoarse voice of the ghost or just expressing the emotions, Vidya was splendid.

6. Adah Sharma (1920): The film was every bit of a horror cliche. It had a mysterious huge bungalow, strange happenings, only a couple and lots of chilling experiences. Adah Sharma was too good at essaying the evil outbursts of the spirit within her. The film was based on a lot of typical things but the horror elements were portrayed well by Adah.

7. Sunny Leone (Ragini MMS 2): Even Sunny Leone couldn't resist the temptation of turning a ghost on the screen. Although she played herself in the sequel of the spooky original, she maintained the erotica with horror. As the trailer of the film itself said fear turns sexy, we saw Sunny turn into a sexy seductress and being scary too. Although she was not so appreciated for her scary tactics, Sunny did do the spooks!

8. Anushka Sharma (Pari): Anushka Sharma plays the supernatural second time with her upcoming film Pari. Although in Phillauri we saw her as a friendly ghost, Pari seems to be really scary. The trailer of the film has shocked everyone with Anushka's transformation and now we too can't wait to watch the film.

With experimenting with different characters in different films, actresses have one point resorted to the horror genre for a change. For some it worked, for some it did not. Which of the other actresses from the Bollywood industry would you love seeing in a horror role? Do let us know.

(The above story first appeared on LatestLY on Feb 17, 2018 08:19 PM IST. For more news and updates on politics, world, sports, entertainment and lifestyle, log on to our website latestly.com).