Guilty First Poster Out! Kiara Advani Goes Grunge In This Netflix Original, Trailer To Be Out Tomorrow

Guilty's first poster gives you a glimpse of the world Kiara Advani's rebellious character will belong to. A rockstar enthralling his audience with two other characters sizing you up...interesting! 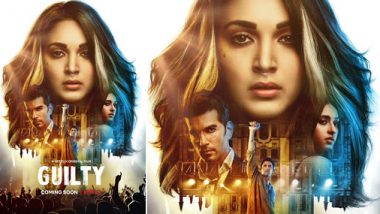 Kiara Advani ditches her demure, timid, meek and submissive Preeti act from Kabir Singh for a rebellious turn in Netflix Original film Guilty. This is her fifth project with Karan Johar as Guilty is made in association with Dharmatic, Dharma Productions' Digital arm. The first poster of the film is out and it introduces some new characters as well. As of now, we only saw Kiara's look from the film which is grunge with coloured hair, nose piercing and interesting attire. This poster has someone as a rockstar enthralling the audience with two other characters looking closely at the mirror. Guilty First Look: Kiara Advani Ditches Her 'Preeti' Avatar For Something Dark and Rebellious

Those who aren't aware, Guilty addresses the other side of rape. A small-town girl accuses a  rockstar of rape and his fire-brand girlfriend stays with him to prove he isn't guilty. We did see something on similar lines in Section 375. Hopefully, this will be different.

We’re all #Guilty of something. #Guilty Trailer out tomorrow. @advani_kiara pic.twitter.com/13kSkdvL87

Speaking about Guilty, Karan Johar had said, "Today a filmmaker with an interesting idea has so many avenues to connect with the audience, and Netflix is definitely one of the most exciting among them. As a content creator, there has never been a better time to tell stories. Guilty is a film that explores a personal, powerful subject where a small-town girl takes on the structures that protect the perpetrators of rape. Ruchi Narain is helming the film as a director, and we at Dharmatic, could not be more excited than to see her vision come alive across 190 countries on Netflix."

(The above story first appeared on LatestLY on Feb 17, 2020 12:52 PM IST. For more news and updates on politics, world, sports, entertainment and lifestyle, log on to our website latestly.com).