Kiara Advani's next is Guilty, a project helmed by Karan Johar for Netflix. After the recent success of Kabir Singh, the actress is definitely a hot property in B-town and we see no reason why any filmmaker should hesitate to approach her for his next. 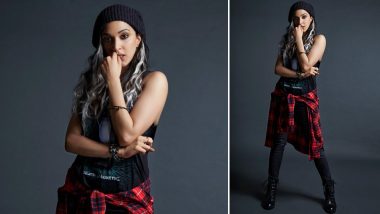 Kiara Advani is the busiest actor in the Bollywood currently. After the recent and tremendous success of her last release, Kabir Singh, the actress is currently working on Guilty - a Dharma venture that will release on Netflix next year. After the petite 'Preeti' from Kabir Singh was the girl of every man's dreams, Kiara's first look from Guilty will definitely make you wary of her. As Shahid's character says, 'She's a rebel with a cause' in this new venture and we are glad to see this side of hers. With as Many as Six Projects in her Hand, Kiara Advani is the Busiest Actress in Bollywood Currently.

Dressed in a black tank top with matching jeans a plaid shirt tied around her waist and boots, the Laxmmi Bomb actress will remind you of Lindsay Lohan's popular look. However, we are smitten by those white streaks in her hair that are taking the entire experience a notch higher. While Lust Stories and M.S.Dhoni showed you the delicate and polite side of hers, Guilty will unveil something dark.

Earlier when Karan Johar was asked to describe what Guilty is all about, he said, "Today a filmmaker with an interesting idea has so many avenues to connect with the audience, and Netflix is definitely one of the most exciting among them. As a content creator, there has never been a better time to tell stories. Guilty is a film that explores a personal, powerful subject where a small-town girl takes on the structures that protect the perpetrators of rape. Ruchi Narain is helming the film as a director, and we at Dharmatic, could not be more excited than to see her vision come alive across 190 countries on Netflix.” Shahid Kapoor, Kiara Advani's Reaction To The Weekend Box-Office Collection Of Kabir Singh Is Highly Hilarious.

Kiara is definitely striking all the right chords currently and the future sure looks promising for her. Beside Guilty and Laxmmi Bomb, she has Indoo ki Jawaani, Shershah and Good News in her kitty.

(The above story first appeared on LatestLY on Jun 25, 2019 04:13 PM IST. For more news and updates on politics, world, sports, entertainment and lifestyle, log on to our website latestly.com).