The movie will stream on Amazon Prime from June 12. 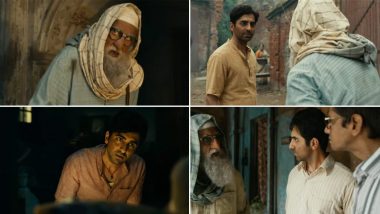 And the much-awaited trailer is here! Shoojit Sircar directed Gulabo Sitabo starring Amitabh Bachchan and Ayushmann Khurrana has decided to go the OTT way, ditching the theatrical release. As the makers have planned to make it a digital experience, they have dropped the trailer of the film already and it looks amazing! With the trio of Shoojit Sircar-Big B- Ayushmann collaborating, what else could one expect anyway? Twitterati is thrilled about the trailer as well. Gulabo Sitabo Trailer: Amitabh Bachchan and Ayushmann Khurrana’s Delightful Banter Promises Paisa-Vasool Entertainment in Shoojit Sircar’s Slice-of-Life Comedy (Watch Video).

The story has a rural set-up and has funny banter of Ayushmann and Sr Bachchan. It revolves around an old haveli owned by Amitabh Bachchan where Ayushmann lives as a tenant, who he wants to shoo away. This simple plot written by Juhi Chaturvedi has been decorated with fine scenes and dialogues, and the movie is sure to be a laughter riot. However, even though there is no trace of any emotional element here, you can totally expect that from a Sircar cinema! Here are some of the tweets.

oh my god this bit in particular left me laughing like crazy with @ayushmannk’s expression and lucknowai accent and @SrBachchan being is best.#GulaboSitaboTrailer was a riot 😂❤️ pic.twitter.com/lTGEfS5BdB

Watch the reaction video of #GulaboSitaboTrailer . Film looks so impressive. From their looks, to simplicity and their accent everything looks perfect. Sir @SrBachchan & Sir @ayushmannk are going to take u on a fun ride.

One For The Combo

One For The Younger Star

Ayush ji you are expert in giving content films. Waiting for this one.#GulaboSitabo #GulaboSitaboTrailer

Shoojit Sircar and Amitabh Bachchan have earlier worked in films like Pink, Piku and an un-released Shoebite. On the other hand, the director launched Ayushmann in Bollywood with their first film together, Vicky Donor. The movie will stream on Amazon Prime from June 12. What did you like the most about the trailer?

(The above story first appeared on LatestLY on May 22, 2020 05:04 PM IST. For more news and updates on politics, world, sports, entertainment and lifestyle, log on to our website latestly.com).