The short film Happy Birthday, featuring Aahana Kumra and Anupam Kher, has bagged multiple nominations at the New York City International Film Festival (NYCIFF). The film recently made it to the final of the Paris Play Film Festival. 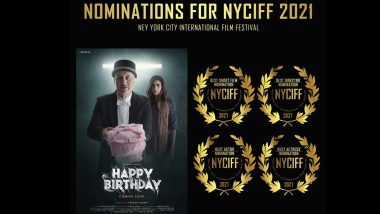 "It always feels incredible to be appreciated because an artist puts so much effort into making the film. This project is very close to my heart. I am so grateful and thrilled to be nominated at such a prestigious Film Festival, and I hope the team wins big," Aahana said. Anupam Kher, Aahana Kumra Wrap Up Shooting of their Upcoming Short Film 'Happy Birthday' (Watch Video).

The film recently made it to the final of the Paris Play Film Festival.

(The above story first appeared on LatestLY on May 06, 2021 02:41 PM IST. For more news and updates on politics, world, sports, entertainment and lifestyle, log on to our website latestly.com).