Happy Birthday, Malaika! The 90s kids in our country have watched her ruling the Indie pop songs, and she danced right into our hearts! As we celebrate Malaika’s birthday, let us look at five of the songs that made her every 90s kid’s ultimate crush. 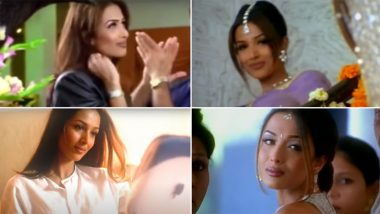 Happy Birthday, Malaika Arora! An actress, model, dancer, Malaika is an epitome of grace. With time, she only gets better, just like wine! From her first appearance on television as a VJ for MTV to her breathtaking dance moves, Malaika became the reigning queen of many hearts. Smart, sexy and stylish, it is impossible to match up to her level of bold and sass. And we must admit, more than her acting, her success is credited to her awesome dance skills. She turns 47 today, yes, you read that right. We cannot even call her goals because that is way too hard to achieve. The 90s kids in our country have watched her ruling the Indie pop songs, and she danced right into our hearts! As we celebrate Malaika’s birthday, let us look at five of the songs that made her every 90s kid’s ultimate crush.

Malaika made her Bollywood debut as a producer through Arbaaz Khan’s production company, but she later ventured into acting in films. She starred up in several movies like Kaante, Bichhoo, Dil Se, to name a few, but she actually ruled our hearts with those ace dancing skills. Even her appearances on many Indie pop songs, Malaika redefined women’s shelf life in this industry.

Over 40 and with a teenage son, she is nowhere close to fading into oblivion. Although she loves sharing many tips to her flawless beauty, we hardly doubt we can ever go even close to just how gorgeous she is. The closest we can come to her is maybe by trying to match up to her smokin’ dancing skills, which she has been displaying over the years, one dance number at a time. These songs from the 90s will surely make you nostalgic and justify even more as to why we are all just obsessed with her.

Just like Malaika, these songs will always remain evergreen. Throughout the lockdown, she continued to give glimpses of her everyday life, and it has been amazing. We wish the actress, a very Happy and safe Birthday! May you continue to shower your hotness and oomph to all of us with all amount of grace, bold and sass that you are.

(The above story first appeared on LatestLY on Oct 23, 2020 07:50 AM IST. For more news and updates on politics, world, sports, entertainment and lifestyle, log on to our website latestly.com).