Disha Patani wishes rumoured beau Tiger Shroff on his birthday with a throwback video and it's their first dance block together. Check it out! 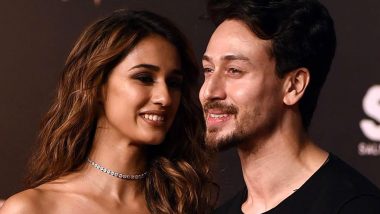 The charismatic Bollywood actor, Tiger Shroff turns a year older on March 2, 2020. And well, making his birthday extra special is none other than the lad's rumoured girlfriend, Disha Patani, who took to her Instagram to wish the Baaghi 3 star. The sexy girl really took some efforts and dug out an old video of Tiger and herself dancing to Bang Bang song from Hrithik Roshan's flick. The video looks old and mostly from the time (2014) when the Greek god's movie was a hit. The birthday wish is really ah-mazing as it sees Tiger doing what he does best. Happy Birthday, Tiger Shroff! Here’s Why We Are Smitten Over Your Casual AF Monochrome Fashion Arsenal!

Disha via the IG post also revealed how she was damn nervous to groove alongside Tiger and also exclaimed that this happens to be their first dance block together. Tagging Shroff as 'bagh', Patani also appreciated the birthday boy's dancing skills by writing he is 'so difficult to match upto'. We are totally smitten by the dancing clip as Disha-Tiger look young and so hot together in their dancing gear. Just in case you missed watching the video, watch it ahead. Tiger Shroff Reveals his Plans of Going Hollywood and How He has Already Set them in Motion.

This was our first dance block together, i was way too nervous and shy to dance next to you (ofcourse i couldnt do quite an impressive job, given the right excuses) 🤪🐵 happiest b’day baagh you will always be frightening to dance next to, thank you for being so difficult to match upto🐵😜❤️🤗 go crush it this weekend at the box office ronny🔥🔥❤️ @tigerjackieshroff

Meanwhile, Disha and Tiger have worked together in Baaghi 2 and the two will also be seen again in the third instalment of the movie titled as Baaghi 3. Though Disha is just for an item song in the flick, fans are the happiest to see the two in one frame even for a few minutes. Shroff's flick is set to make it to the silverscreen on March 6, 2020. Stay tuned!

(The above story first appeared on LatestLY on Mar 02, 2020 12:15 PM IST. For more news and updates on politics, world, sports, entertainment and lifestyle, log on to our website latestly.com).