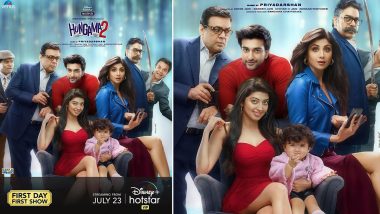 Director Priyadarshan's comedy film is set to debut on Disney+ Hotstar on July 23, the streaming platform announced on Wednesday. The official Twitter handle of Disney+ Hotstar shared the news of the film's release date along with a new poster. "Cannot wait to see our favourites back on screen, and it's going to be double the 'hungama' with this iconic cast. Are you ready for a laughter riot?" the tweet read. It's a Wrap for Hungama 2! Priyadarshan Finishes the Shoot of Shilpa Shetty, Paresh Rawal Film.

The film, a sequel to the director's 2003 hit comedy of the same name, was slated to hit theatres on August 14 this year. But in May this year, the film's makers had said that Hungama 2 will skip theatres and release directly on an OTT platform as cinema houses remain shut due to the deadly second wave of the coronavirus pandemic.  Hungama 2 Actress Pranitha Subhash Gets Married To Businessman Nitin Raju In A Private Ceremony (View Pics).

The trailer of Hungama 2 will be unveiled on Thursday. Veteran actor Paresh Rawal is returning for the sequel and he is joined by Shilpa Shetty Kundra, Meezaan, and Pranitha Subhash in the cast. Hungama 2 will also feature Ashutosh Rana, Manoj Joshi, Rajpal Yadav, Johnny Lever, and Tiku Talsania in pivotal roles. The original film starred Rawal along with Shoma Anand, Akshaye Khanna, Aftab Shivdasani, and Rimi Sen. A Venus Records and Tapes LLP project, Hungama 2 is also produced by Ganesh Jain, Chetan Jain, and Armaan Ventures.