Into the Wild With Bear Grylls: Akshay Kumar Shares a Preview of his Adventures with the Host and it's Hella Exciting (Watch Video)

"When a Western Adrenaline Adventurer meets an Eastern Action Junkie, don't expect fireworks coz Brotherhood is what we found," read a part of Akshay Kumar's caption as he tweeted a preview of his episode with Bear Grylls. 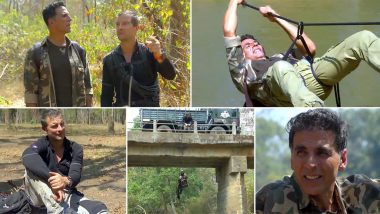 After Prime Minister Narendra Modi and Rajinikanth, Akshay Kumar is the next Indian celebrity to join Bear Grylls on his wildlife adventure. The actor's participation in the show was confirmed way back in January 2020 and he shot for the episode soon after. The episode is slated to air on Discovery+ on September 11, 2020, and later on Discovery channel on September 14. While waiting for it can be tedious, the recent teaser shared by Khiladi Kumar may help you erase the anxiety for the same. Into the Wild With Bear Grylls: Akshay Kumar Shares a Sneak-Peek Into the Maddening Adventure, Episode To Release on September 11 on Discovery+ (Watch Video).

"When a Western Adrenaline Adventurer meets an Eastern Action Junkie, dont expect fireworks coz Brotherhood is what we found.2 fitness enthusiasts enjoying a stroll through wilderness is what I call a perfect walk in the park," tweeted Akshay while sharing a preview of his wildlife escapade with Bear Grylls. For the ones who don't know, Into The Wild With Bear Grylls sees the host and his guest take up different challenges to survive in the wild. The episode gets interesting every minute and with Akshay Kumar in the picture, expect the dose of adventure to go a notch higher. Akshay Kumar Gets Into The Rasode Mei Kaun Tha? Debate With Bear Grylls For Company.

Check Out the Preview of Akshay Kumar's Episode

When a Western Adrenaline Adventurer meets an Eastern Action Junkie,dont expect fireworks coz Brotherhood is what we found.2 fitness enthusiasts enjoying a stroll through wilderness is what I call a perfect walk in the park. Here’s a preview #IntoTheWildWithBearGrylls @BearGrylls pic.twitter.com/eWXibJBqOc

Akshay Kumar was clicked at Mysore airport in January when he was on his way to Bandipur National forest to shoot with Bear Grylls. The actor is the first Bollywood star to be a part of Grylls' adventures and the next in line is Indian skipper, Virat Kohli. More on that later. For now, let's talk about Akshay Kumar and wait for his episode to air.

(The above story first appeared on LatestLY on Sep 07, 2020 12:01 PM IST. For more news and updates on politics, world, sports, entertainment and lifestyle, log on to our website latestly.com).