Into the Wild With Bear Grylls: Akshay Kumar Shares a Sneak-Peek Into the Maddening Adventure, Episode To Release on September 11 on Discovery+ (Watch Video)

Bear Grylls adventurous show Into The Wild has seen many popular Indian faces. Now, Akshay Kumar is going to be the next guest on the show. Read on. 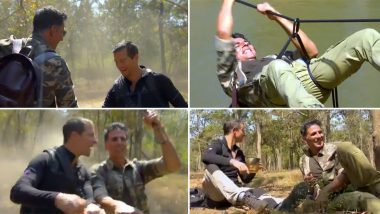 Bear Grylls adventurous show Into The Wild has seen many popular Indian faces. From Prime Minister Narendra Modi to South superstar Rajinikanth, Grylls' series has been thrill and celebrity-filled and how. However, the next guest on his show is going to be none other Akshay Kumar. Earlier, the Khiladi of Bollywood had teased fans with a mini video flashing the premiere date of his episode which is September 11 on Discovery+ and September 14 on Discovery channel. Now, the actor has shared another teaser of Into The Wild and this one gives you a literal tour of what to expect from Akshay's upcoming episode. Into The Wild With Bear Grylls: The Teaser of Akshay Kumar's Thrilling Episode Out Now, Will Premiere on September 11 on Discovery+.

The video starts with the daredevil duo trying their hands on some water sports. We also hear Akki denoting himself as a reel hero and tagging Grylls as the real hero. From entering the jungle to performing some stunts like never before, Bollywood actor is surely up for some thrill with this one. Not just this, the clip also sees the two sipping elephant tea. It looks quite fun. Rajinikanth's 'Into the Wild with Bear Grylls' Episode To Air on Discovery Channel At This TIme; Here's How You Can Watch it Before That!

Check Out The Video Shared By Akshay Kumar Below:

I visualized stiff challenges prior to #IntoTheWildWithBearGrylls but @bearGrylls completely surprised me with the elephant poop tea 💩 What a day 🐊😂 @DiscoveryIn @DiscoveryPlusIn pic.twitter.com/m6YfQXmCcM

Reportedly, Akshay Kumar is the first Bollywood celeb to be a part of the show hosted by Bear Grylls. Owing to the popularity of the actor, we bet, that the TRP of the show will be high and how. Rumours also have it that Indian cricket team's captain cool is also going to be seen on Into The Wild. Stay tuned!

(The above story first appeared on LatestLY on Aug 31, 2020 12:27 PM IST. For more news and updates on politics, world, sports, entertainment and lifestyle, log on to our website latestly.com).