Shah Rukh Khan's son Aryan and Juhi Chawla's daughter Janhavi at the Kolkata Knightriders table at the IPL 2021 auction has caught the imagination of many. These two had replaced their parents at the table and looked very comfortable doing so. No wonder that Juhi Chawla just can't stop gushing over them 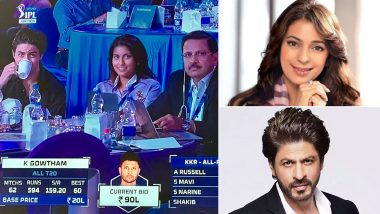 IPL 2021 player auction was held yesterday and apart from punning on Arjun Tendulkar's selection to Mumbai Indians, one other thing that caught everyone's attention was the attendees at the Kolkata Knight Riders table. Rather than Shah Rukh Khan and Juhi Chawla, it was their kids, Aryan and Jahanavi. There were many sightings of the young kids and their pictures are all over the internet. Juhi particularly is feeling extremely proud of this moment. Shah Rukh Khan’s Son Aryan & Juhi Chawla’s Daughter Jahnavi Attend IPL 2021 Player Auctions for KKR (See Pics)

Juhi took to Twitter to express her delight over her daughter and SRK's son being spotted at the auction. If you ask us, for a few seconds initially, we couldn't differentiate between Aryan and SRK. The latter has a similar way of sipping coffee. In fact, the creases on the forehead seemed similar (this is what happens when you watch too much Shah Rukh Khan for two decades). So took us by surprise when we realised it's not him but his son.

So happy to see both the KKR kids, Aryan and Jahnavi at the Auction table .. 🙏😇💜💜💜

It won't be surprising to see the same lot at IPL matches as well. Aryan and Jahanavi are perfect successors of SRK and Juhi and hold the Bollywood quotient firmly in place in the coming years.

(The above story first appeared on LatestLY on Feb 19, 2021 01:24 PM IST. For more news and updates on politics, world, sports, entertainment and lifestyle, log on to our website latestly.com).