Is Bhaag Beanie Bhaag Inspired By The Marvellous Mrs Maisel? Lead Actress Swara Bhasker Sees The Comparison As a Compliment! 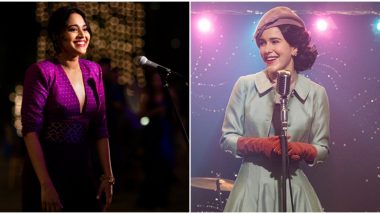 You see, the plot of the series is about a woman who gives up her life's status quo to become a standup comedian. Does it ring a bell? If yes, then it's because it seems like the plotline for Amazon Prime web-series The Marvelous Mrs Maisel. But, so far we only know the one-line synopsis of the show, so comparisons would be premature.

Swara has said in a statement, "Marvelous Mrs Maisel is a fantastic series and comparisons to that show is a great compliment for me. How similar the show is to the Marvellous Mrs Maisel series I don’t want to comment on- viewers can watch and decide but the story is fun and full of surprises. My character Beanie is super relatable and likeable, and I hope it gets a lot of love from the viewers."

In an interview with IANS, Swara had talked about the series in more details. She said, "I'm excited about ‘Bhaag Beanie Bhaag’. The series revolves around Beanie, who has always done what’s asked of her — until she decides to run from her very comfortable life and pursue a career in stand-up comedy,"

"As she navigates the demands of everyone, from her concerned parents to her proposal-popping boyfriend, this is Beanie’s journey to carve out the life she wants for herself amidst the chaos," Swara added.

Swara was last seen in the web-series, Rasbhari, which should be on your bucket list to watch. The sequel of Veere Di Wedding is also in works, so look forward to that as well.

(The above story first appeared on LatestLY on Jul 18, 2020 09:10 PM IST. For more news and updates on politics, world, sports, entertainment and lifestyle, log on to our website latestly.com).