Dropped quietly on Amazon Prime Video last week, Rasbhari has been a talking point on social media in the past couple of days, even eclipsing fan theories on Dark, whose last season dropped on Saturday. 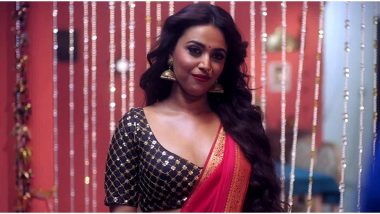 Swara Bhasker and controversy now go hand in hand, which also extends to her projects. The actress has been a favourite dartboard for right-wing groups online, for her stark views on the government and her political stances. Remember how her masturbation scene from the 2018 film Veere Di Wedding is still being used to troll her? But the unabashed actress takes these trolls headon and does more projects that get to the wrong side of these conservatives. Like her recent web-series, Rasbhari. Swara Bhasker on Her Web-Series Rasbhari: It Reflects Some Very Important Issues in the Society Which We Do Not Discuss Aloud

Dropped quietly on Amazon Prime Video last week, Rasbhari has been a talking point on social media in the past couple of days, even eclipsing fan theories on Dark, whose last season dropped on Saturday. Rasbhari is an adult comedy revolving around a teenager in Meerut, and his obsession with his sultry new teacher, who also is the talking point of his town. While the series may feel like it is a rehashed premise for smut, Rasbhari is actually a satire on the sexual frustrations prevalent in the small towns that lead to perversions, outrage and often violence.

Bhasker plays the teacher, while Ayushmaan Saxena plays the teenage protagonist, Nand, who finds out a strange secret about her. In our review, we found the series to be a mixed bag. But thanks to the controversies surrounding Rasbhari, it is now one of the top trending shows in Amazon Prime Video. This, despite the fact that Rasbhari was sent for streaming without proper marketing and promotion.

So in a way, the outrage has helped the show in lot of ways, as the haters are watching it to fund reasons to hate its lead actress more. While the rest are watching it to satiate their curiosity as to what the heck is all the chatter about!

While it is definitely a win-win situation for the makers, we still have to address certain accusations that have been shoved on Rasbhari. And how some of them make no sense.

Look, while Rasbhari is a bold, engaging comedy with good performances from its cast, it isn't a great show. It has its issues, like it deals with caricatures. The making isn't that good. Some plot elements don't make sense. Or how the Primal Fear-twist in the final episode is pretty infuriating and ruins some of character development before. And the cliffhanger in the end leaves us confused. Rasbhari Movie Review: Ayushmaan Saxena&#8217;s Performance Saves This Sluggish Coming-Of-Age Comedy Starring Swara Bhasker.

But the kind of criticisms that Rasbhari is dealing with has less to do with the content and more to do with its lead actress. We look at the five biggest accusations against Rasbhari and why they don't really make much sense.

Accusation #1 - It Sexualises A Kid

This is the supposedly problematical portion of #Rasbhari, series by @ReallySwara. This scene can have many narrative if one wants too But, if this is a problem, I have question over all kids dance reality shows

Let's start with the biggest controversy of all, because this accusation was made by a Bollywood personality and someone very close to the ruling BJP party. Lyricist and CBFC Chairperson, Prasoon Joshi accused Rasbhari on Twitter that by making a little kid dance suggestively to a Hindi song ("Saat Samundar" from Vishwatma), the show is trying to sexualise a child.

The scene he is referring to happens in the beginning of the second episode and is one of the flashback portions that gives us a peek into the past of Swara's character. I am not sure Prasoon has seen the entire series or just that clip, but my bets are on the latter. For if you have seen the whole sequence, you will realise it is about how kids get influenced by what they see in Hindi item songs and imitate the steps. Broaden your sights and you would find that it is a common occurrence, where parents let kids gyrate to songs like "Sheila Ki Jawaani" or "Chikni Chameli" during functions or on reality shows. The scene was merely satirising the impact of these songs on the kids' minds. 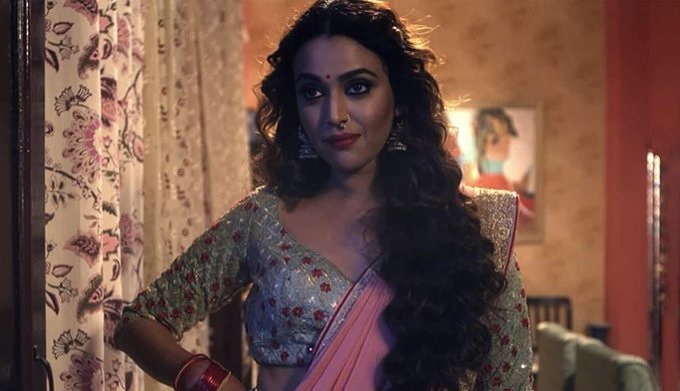 Accusation #3 - You Cannot Watch Rasbhari With Your Family 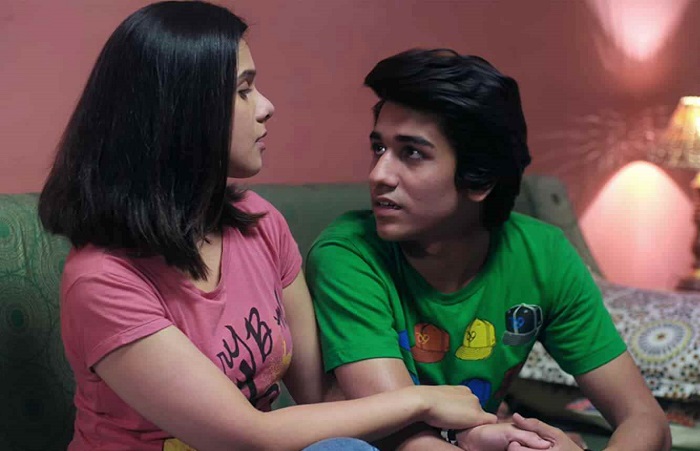 How is it the series' fault when it advertises itself as a show for 18+ audience and yet, you want to watch it with your family and kids?

Accusation #4 - Rasbhari is Demeaning To Women 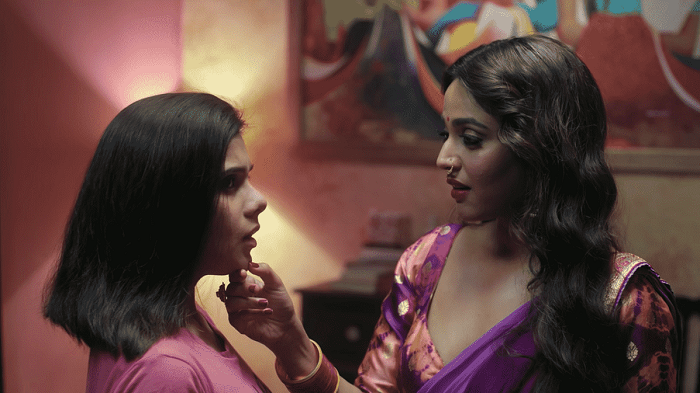 Certain viewers have issues with how the show tries to objectify Swara Bhasker's character with suggestive camera angles. Then there is also the depiction of her alter-ego, the titular Rasbhari, whose seductive demeanor also didn't go down well with viewers. The suggestive camera angles are there, no doubt, but they are sparsely used, as compared to similar other shows. Also they were needed, since Swara's character was seen from the view of a high-on-hormones teenage boy.

Secondly, does the Rasbhari character demean women? While the series might not have pulled it off convincingly, Rasbhari's character is about a woman expressing her sexuality unabashedly. Let's also remind you that the show also has Priyanka (Rashmi Agdekar), the protagonist's girlfriend, who has no qualms about making the first move when it comes to making her feelings expressed. In fact, most of the haters of the show are also represented in it, either as the horny men in the town or their frustrated wives who would even get into lynching of a woman for making their husbands stray, rather than question their own men. 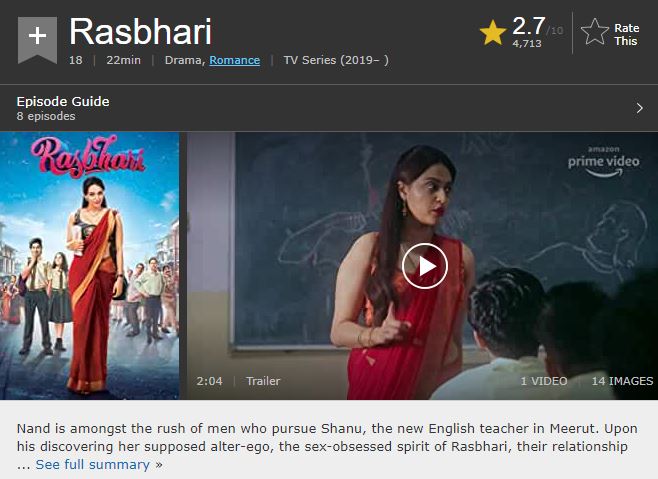 The IMDB Rating of Rasbhari

Look at the above IMDB rating. At one point, it was even 2.1. Most of the negative users' review on its page are merely one or two-liners that seem to be posted for dubious reasons. Like the few pasted below: 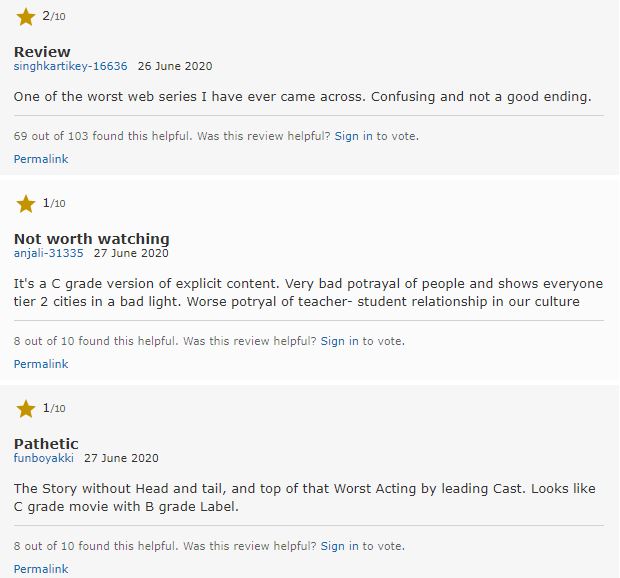 User Reviews of Rasbhari on IMDB

Rasbhari is, by no means, a great show, and it has left people with mixed reactions. But Rasbhari isn't as bad as the above rating suggests. Most of the negative reviews either didn't get the satire, or are plainly vindictive either to the content or the actress in question. Also you cannot call a show sleazy while also slut-shaming the actress. Then you are the people Rasbhari is calling out for your narrow-minded attitude.

(The above story first appeared on LatestLY on Jun 29, 2020 03:52 PM IST. For more news and updates on politics, world, sports, entertainment and lifestyle, log on to our website latestly.com).