Isha Koppikar Birthday Special: Five Songs Of The Actress That Prove Why She Will Always Be The Ultimate Khallas Girl! 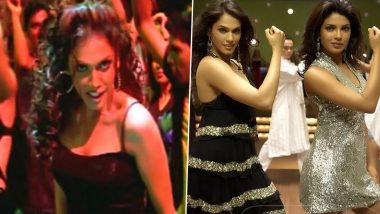 Many believe Isha Koppikar's filmi journey began with Nagarjuna Akkineni's Chandralekha in 1998. But she shot a Hindi movie in 1997 titled Ek Tha Dil Ek Thi Dhadkan with Inder Kumar as her hero. The movie apparently never released. The actress was first seen on Bollywood screen in a cameo in Hrithik Roshan and Karisma Kapoor's Fiza. Her first lead role in a Hindi film came with Pyaar Ishq Aur Mohabbat in 2001. It was an ensemble film where the lady shined brightly. But what gave her immense popularity was her item song Khallas in Ram Gopal Varma's Company. Even today we remember it for Sandeep Chowta's racy composition, the grungy feel and the steamy Isha Koppikar. There will never be another Khallas girl. RGV did try to recreate the magic with Zareen Khan but then old is gold for a reason, right? Isha Koppikar Turns Cop for New Web Show

Khallas isn't the only song that proves what a fantastic dancer she is. The actress has been part of some of the most famous dance tracks of that era and on her birthday, let us tell you five such songs which are still played at discotheques.

We surely can't go ahead without mentioning Isha's career-defining song. It's hot, steamy, pacy and every bit controversial.

Another song that has the lady dancing like a dream. No wonder Arbaaz Khan and Sanjay Kapoor can't take their eyes off her.

Yes, it was an Upen Patel launchpad track but Isha added a lot of feminine charm to this foot-tapping Himesh Reshammiya track.

It's not easy to match steps with Priyanka Chopra who is an unbelievably awesome dancer. But that face-off between her and Isha is just fantastic. It even sidelined Shah Rukh Khan in the song. Sorry SRK, this had to be said!

There are more such amazing tracks of Isha Koppikar that deserves a lot of love. Which one is your fav Koppikar track?

(The above story first appeared on LatestLY on Sep 19, 2020 12:19 PM IST. For more news and updates on politics, world, sports, entertainment and lifestyle, log on to our website latestly.com).