It's My Life: The Delayed Hindi Remake Of Bommarillu Starring Harman Baweja And Genelia D'Souza Will Finally Premiere On TV; Here's How The Cast Looks Now

Harman Baweja and Genelia Dsouza's It's My Life is ready to premiere on TV instead of theatres on November 29. This is a much delayed Hindi remake of Bommarillu which also had Genelia in the lead. 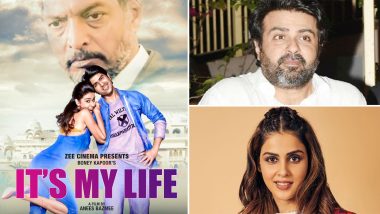 Boney Kapoor sure has some delayed releases in his kitty. A few years back his Milenge Milenge suddenly hit the theatres in 2010 with Kareena Kapoor Khan and Shahid Kapoor. This was a much-delayed release and was shot when these two were still considered a couple. Today, they are married to other people. Now comes one more movie of his which was delayed for years but this time it goes straight to Television. The movie is the remake of the Telugu film Bommarillu. The do-over is titled It's My Life and stars Harman Baweja and the original heroine from the Telugu movie, Genelia Dsouza. Genelia D’Souza Opens Up About Her Battle with COVID-19, Says ‘21 Days in Isolation Have Been the Most Challenging to Deal With’

Yes, it's quite shocking. Many of us are aware of this movie because we did witness the slight ascend and a quick descend of Harman Baweja back in the early 2000s. He was quite talked about because of his style which markedly similar to Hrithik Roshan. In fact, we feel that's what hurt his career more than his histrionics. Genelia of course was doing some good movies in many film industries of the country then and her effervescent characters in them were highly liked. But given the fact that the movie is releasing so late, both their careers are quite non-existent now. As for the ghost of Nana Patekar in the poster, well he is in a bit of a pickle since the Me Too controversy erupted.

Here's how they look now...

I was lying down.. its a cold fall evening in Toronto. I got up .. rushed down.. and opened my laptop.. I wanted to know what happened to Harman Baweja?! And this!!! Looking 59 at 39. Gosh! pic.twitter.com/GR11YFl9qw

Before you go, check out the trailer of the film right here...

Bringing to you a complete family entertainer packed with drama, emotion, laughter and romance!

Boney Kapoor in an interview with TOI had blamed Harman for the delay saying, "Harman himself is partly to blame for the delay. I wish he hadn’t given priority to his other two films Victory and What’s Your Raashee?. If he had listened to me and focused on It’s My Life, he’d have had a superhit on his hands." Told you, Baweja had some cool movies in his kitty back in 2010.

(The above story first appeared on LatestLY on Nov 05, 2020 12:40 PM IST. For more news and updates on politics, world, sports, entertainment and lifestyle, log on to our website latestly.com).