Jab Shah Rukh Khan Met AR Rahman: How A Potentially Dynamite Combo Never Proved to Be a Successful Collaboration for Both!

There is a huge buzz going on that AR Rahman is going to score the music of Shah Rukh Khan's upcoming film, that's directed by Atlee. The buzz does make sense when you know that the director's last two movies - Mersal and Bigil - were scored by the Oscar winner. 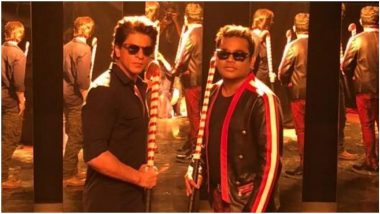 There is a huge buzz going on that AR Rahman is going to score the music of Shah Rukh Khan's upcoming film, that's directed by Atlee. The buzz does make sense when you know that the director's last two movies - Mersal and Bigil - were scored by the Oscar winner. Of course, nothing is confirmed yet, just like the film itself. After all, Shah Rukh Khan is in no hurry to announce his next film anytime soon, so everything is a conjecture right now. Shah Rukh Khan to Play the Double Role of Father and Son in Atlee's Next?

But even if that's true, the supposed collaboration is quite an interesting one. AR Rahman has scored music for four of Shah Rukh Khan's films in the past, most of them memorable soundtracks. The thing is that the soundtrack and Khan's star-power weren't enough to make most of the films into a success at the box office. And when it turned a success, Rahman belted one of his most forgettable scores. So when one succeeded, the other failed!

In this special feature, let's look at the times when SRK and ARR worked together in the past and what happened to those films.

The first time that AR Rahman scored for a Shah Rukh Khan movie was in this 1998 film, which marked the Hindi debut of Rahman's fave director Mani Ratnam. Dil Se...'s soundtrack is easily one of Rahman's best, from the infectious "Chaiyya Chaiyya" to the sombre "Ae Ajnabi"  - each song in the film continues to mesmerise the listeners even today. Pity that the film failed to work at the box office, though Dil Se... has achieved the cult status these days of being an underappreciated gem.

Shah Rukh Khan and Juhi Chawla played the leads in Shashilal K Nair's action entertainer, that was a clear ripoff of Hum Hain Rahi Pyar Ke (interestingly, also starring Juhi) but with more fight scenes. The most attractive factor of the film, apart from the pairing, was AR Rahman's songs. Especially "Khamoshiyan Gungunane Lagi" and "Sona Nahi Na Sahi". One 2 Ka 4, however, was a big disaster at the box office, taking a poor opening that even surprised SRK fans.

A masterpiece. A legendary film. Perhaps even better than Ashutosh Gowariker's Lagaan. Shah Rukh Khan at his finest. The film that's bold, critical and yet patriotic. You can use any of these phrases to describe this 2004 film. But no amount of praising can deny the fact that Swades underperformed at the box office at the time of its release. Not even Rahman's fine music - both songs and BG - can do much about it. Even though years later, we have to remind each other how the interlude about Lord Ram in the song "Pal Pal Hai Bhari" signifies the cultural unity of our country with the message that needs to be heard.

The only box office 'hit' in the list, Jab Tak Hai Jaan gained attention during its release for its casting (SRK, Katrina Kaif, Anushka Sharma) and for being Yash Chopra's swansong (not to mention, the movie where King Khan broke his kissing clause). While the filmmaker would be sorely missed, we can't help but say that JTHJ remained one of his weaker film, perhaps the weakest. Same goes for AR Rahman's shockingly average score, where the only tune worth praising was the poem. Shah Rukh Khan Makes Big-Screen Return With a Cameo in R Madhavan's ‘Rocketry’ and His Fans Go Crazy!

Listen to the Jukebox:

Oh wait, there is actually a film where AR Rahman scored awesome music that Shah Rukh Khan starred in, which was a proper success at the box office. But there is a catch!

This Shaad Ali film was the remake of the Tamil hit Alaipayuthey, with ARR recycling most of the songs from the original. The movie, featuring Rani Mukerji and Vivek Oberoi in the lead, was a box office hit. Shah Rukh Khan, along with Tabu, had cameos in the third act, though they didn't feature in any Rahman song! Is Shah Rukh Khan a ‘Lucky Charm’ When It Comes to Cameos? The Answer Is, Sadly, NO, and We Have Proof!

Apart from these, there were two films that were supposed to star SRK, where ARR Rahman was supposed to compose the score. Before Dil Se... happened, it was a Subhash Ghai film called Motherland in which Rahman was first supposed to score music for a SRK movie. The film, which also was supposed to star Dilip Kumar and Amitabh Bachchan, was later shelved after SRK reportedly walked out of the project. Ghai later worked with Rahman in Taal, leading to a phenomenal album.

Later, before Enthiran was made with Rajinikanth in the lead, Shankar was supposed to make the film in Bollywood first with Shah Rukh Khan as the hero/villain. Of course, like most of the director's projects, Rahman (who scored for the final film and its sequel) would have been on board as a composer. That project fell out.

So let's hope that the Atlee film - if and when that happens - prove to be luck-breaker for SRK-ARR, with the former scoring a hit, and the latter giving an incredible soundtrack for the film.

BTW, before we go, let's also remind you of the time when Rahman and Khan reunited a couple of years back for a motivational score of Indian players participating on Hockey World Cup 2018. What's more, the songs also has Tamil superstar Nayanthara, who is rumoured to be the leading lady in the Atlee film!

BTW, if you ask which composers have been lucky for Shah Rukh Khan at the box office, we have to say the following - Jatin-Lalit, Anu Malik and Vishal-Shekhar.

(The above story first appeared on LatestLY on Jun 28, 2021 05:02 PM IST. For more news and updates on politics, world, sports, entertainment and lifestyle, log on to our website latestly.com).