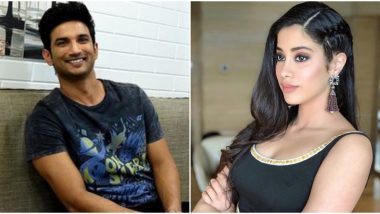 While Bollywood lost its many gems in actors like Sridevi, Irrfan Khan, Rishi Kapoor and Sushant Singh Rajput, let's be happy about the memories that they have left us with. Their superior talent and dedication for the profession were unmatched and the industry will never be able to cope with this huge loss. While Sushant's death probe has certainly become more of a media trial, Janhvi Kapoor believes nothing can come out of negativity, aggression and speculations. The Gunjan Saxena actress in her recent interaction with Bollywood Hungama has explained why she believes the work of these late stars has resulted in ownership for actors in fact, and that the love for them in Indian audiences cannot be compared.  Gunjan Saxena – The Kargil Girl Movie Review: A Genial Janhvi Kapoor and a Fabulous Pankaj Tripathi Effuse Warmth With Their Bonding in This Likeable Biopic.

Like Sushant, even Sridevi's demise had unveiled a very dark and brutal side of media which received a severe backlash from celebrity and audiences alike. When Janhvi was asked how she feels about being on the other side of the debate this time, the actress said, "The kind of work that my mom (Sridevi) has done, the kind of work SushantSinghRajput has done and the way he touched people's lives. Especially with the Indian audiences, I feel like there's a sense of ownership for actors. They really own you. The way that they love and this country, I don't think any actor in any other country gets that kind of love. "

Addressing the kind of reaction Sushant's demise received and the trolling that followed next, Kapoor said, "I understand the feeling of loss is very personal and the only way I can explain it to myself is maybe they are not being able to come to terms with that loss and that can give way to many things. People react to things differently." Sushant Singh Rajput Death Case: Bihar IPS Officer Vinay Tiwari Transferred to CBI? Here's a Fact Check as Fake News Goes Viral.

Janhvi was among the many names who got slammed for being a product of nepotism in the industry. She was criticised for her acting skills and also for having Karan Johar as her mentor. While the actress preferred staying mum then, she has finally had a dignified reply and it makes so much sense.

(The above story first appeared on LatestLY on Aug 10, 2020 09:09 PM IST. For more news and updates on politics, world, sports, entertainment and lifestyle, log on to our website latestly.com).