Actor Shahid Kapoor on Tuesday celebrated the shooting wrap-up of his upcoming sports drama film 'Jersey' with other cast and crew members of the flick. Check it out. 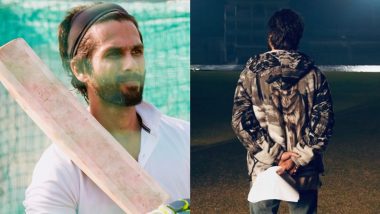 Actor Shahid Kapoor on Tuesday celebrated the shooting wrap-up of his upcoming sports drama film 'Jersey' with other cast and crew members of the flick. The Kabir Singh shared the announcement of wrap-up of his much-awaited film 'Jersey'on Instagram and wrote, "It's a film wrap on #jersey .... 47 days of the shoot during covid. Just unbelievable. I am so proud of the entire team. It's nothing short of a miracle." Jersey: Shahid Kapoor Is Mastering the Cover Drive Shot with Early Morning Practise (Watch Video).

Extending thanks to the crew members who came to the sets amid the pandemic, the star noted, "It's nothing short of a miracle. I want to thank each and everyone from the unit for coming to set every day, putting themselves at risk and doing what we all love doing." The post that features the Jab We Met actor standing in the middle of a cricket ground with his hands on his back, looking at the spotlights to bid adieu to them was liked by Bollywood actor Bhumi Padnekar and more than five lakh fans within a few hours of being posted. Jersey: Shahid Kapoor to Head to Chandigarh by September-End to Shoot the Final Schedule?

Penning down about the film, Kapoor wrote, "Telling stories that touch hearts and make a difference. Jersey is a story that speaks of a Phoenix rising from the ashes. The triumph of an indomitable spirit. If there was ever a time I could connect with the underlying spirit of a film this was it."

The actor at the end of the caption solaced his fans to remember that the world shall soon overcome the pandemic. Kapoor also posted a picture of the complete star cast and crew celebrating the wrap-up of the movie and cutting a special cricket bat and ball designed cake to mark the day, in the story sharing feature of the app. Jersey: Shahid Kapoor’s Classic Cover Drive Shot in This Throwback Video Is Super Impressive (Watch Video).

With the picture, the 'Haider' star penned a nostalgic note that reads, "14th December 2019 to 14th December 2020... This is my dream team. Each one of them has my deepest gratitude." Jersey is a Hindi-remake of a Telugu film of the same name helmed by Gowtam Tinnanuri. After Vikas Bahl's 'Shaandaar', the sports drama would see father and veteran actor Pankaj Kapur and son Shahid sharing screen space together.

Film Jersey revolves around a father named Arjun (Nani), a talented but failed cricketer, who decides to return to cricket in his late thirties because of his desire to represent the Indian cricket team and fulfil his son's wish for an Indian jersey as a gift. How he makes it big despite being limited by his age forms the essence of the story.