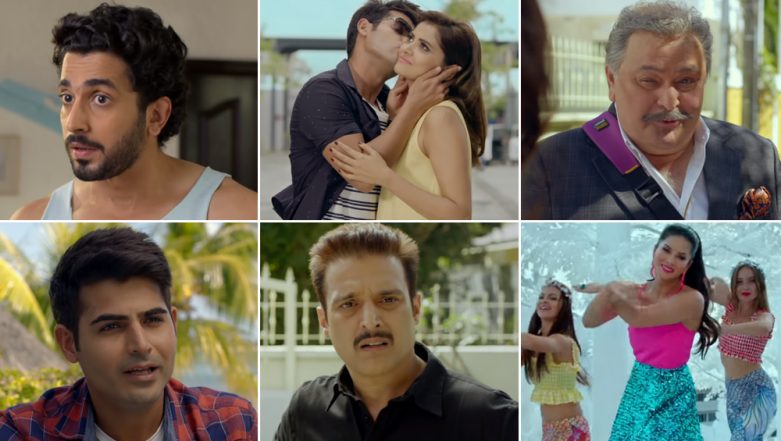 The trailer of Rishi Kapoor's upcoming film, Jhootha Kahin Ka is here and the comedy entertainer promises a fun ride. The film stars The film stars Omkar Kapoor, Sunny Singh, Jimmy Sheirgill, Lillete Dubey and Manoj Joshi in lead roles. Jhootha Kahin Ka revolves around the story of mistaken identity and how it creates havoc in everyone's lives. After Rishi Kapoor left everyone impressed with the courtroom drama Mulk, it is nice to see the actor in a lighter film like this one. Alia Bhatt Poses for a Perfect Family Picture With Ranbir, Rishi and Neetu Kapoor in New York and Fans Ask 'When is the Wedding?'

The trailer features Karan (Sunny) and Varun (Omkar) who live in Mauritius and are not so keen to come back to India. After Varun falls for a girl in Mauritius, in order to convince the girl for marriage, Varun lies to her saying that his father is dead and thus, he would never have to return to India. The father (Rishi Kapoor), in the meanwhile, travels to Mauritius to meet his son and thus begins the confusion.

Rishi Kapoor is currently undergoing treatment for cancer in New York and had completed this film before leaving. The actor took to Twitter to share the trailer of the film and wrote, "A film I completed before coming here. Total mad cracker of a movie. Was the hero of the same title (different story)with Neetu way back in the late 70’s. Hope you enjoy the same."

Jhootha Kahin Ka is directed by Smeep Kang and is produced by Anuj Sharma and Deepak Mukut. The film is all set to release on July 19.