Karan Johar it seems is taking some time off for a family vacation with his kids and mother. The Johar family was spotted at the Kalina airport. Reports suggest they are going to Goa for a short vacay. 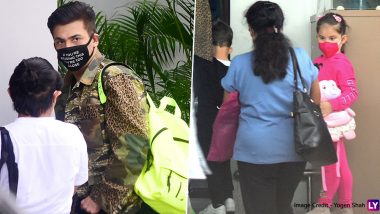 Karan Johar had to bear the maximum brunt for being a star-kids favouring filmmaker post Sushant Singh Rajput's death. People forgot to factor in that he has given an opportunity to a lot of outsiders to direct movies under his banner, Dharma Productions. Nikhil Advani was his assistant director who later on directed Kal Ho Na Ho. But trolls on Twitter are beyond reason and logic anyway. It had become so ugly on social media that the director was hardly active. He recently returned to Instagram and today, he was spotted along with his kids at the Kalina airport. Apparently, the filmmaker is leaving for Goa for a short family vacay. Whether I Live or Die, I’ll Expose You: Kangana Ranaut to Uddhav Thackeray, Karan Johar

Karan is wearing a camouflage jacket and black trousers with a fluorescent green shoulder bag. His kids Yash and Roohi were also spotted along with his mother. Check out the pictures here...

The kids are in vacation mode too.

It could be a wise decision to take some time out and relax in a place like Goa. The COVID-19 pandemic has already made us feel a lot trapped and disturbed. In Johar's case, it amplified when people came down hard on him blaming him for boycotting Sushant.

(The above story first appeared on LatestLY on Sep 16, 2020 04:54 PM IST. For more news and updates on politics, world, sports, entertainment and lifestyle, log on to our website latestly.com).