Khal Nayak 2: Madhuri Dixit Responds to Reports of Starring in Her 1993 Film’s Sequel

There has been buzz about a sequel to the hit 1993 film "Khal Nayak", but the films heroine Madhuri Dixit does not seem to be aware of the reports. "Khal Nayak" features one of Madhuri's most famous songs, "Choli ke peeche kya hai", and a lot of her fans have been hoping to see her in its sequel too. 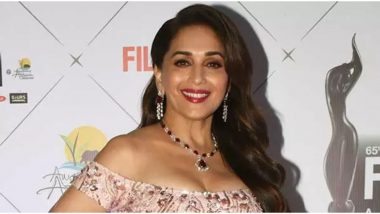 There has been buzz about a sequel to the hit 1993 film "Khal Nayak", but the films heroine Madhuri Dixit does not seem to be aware of the reports. "Khal Nayak" features one of Madhuri's most famous songs, "Choli ke peeche kya hai", and a lot of her fans have been hoping to see her in its sequel too. Asked about the sequel, Madhuri told IANS: "That's news to me. I have no idea. It is a surprise for me." "It depends on the script, how they are planning to do, where they want to shoot. I think we will take things as they come," she said when asked if she would like to continue with the film's story that revolved around the escape and attempted capture of the criminal Ballu (Sanjay Dutt) by the cop Ram (Jackie Shroff) and his girlfriend, officer Ganga (Madhuri). Madhuri Dixit Thanks Fans as Her Debut Song ‘Candle’ Shoots Up to 7 Plus Million Views

In fact, she said she hasn't really given a thought to remakes or sequels of any of the films that she starred in. "I think it's up to others," said the actress, who has given many hits like "Tezaab", "Dil", "Saajan", "Hum Aapke Hain Koun..!" and "Dil To Pagal Hai". As of now, she looks forward to getting back to the studios after a long break due to the coronavirus-induced lockdown. "After the lockdown, I will resume my projects like 'Dance Deewane' and a Netflix project. I will be back to the studios," she said. Last year, Madhuri had made her debut as a producer with the Marathi film "15 August". She followed it up with a second Marathi production, "Panchak". Shah Rukh Khan, Hrithik Roshan and Others Heap Praises on Madhuri Dixit’s Debut Single, Candle (Read Tweets)

Will she be taking a break from her duty as a producer due to the pandemic? "I think the pandemic will dictate whatever we do. I don't know when things will open up completely, when we can start new projects. First, we will take care of projects that we are already doing," she said. Even though she was not shooting for shows or movies in the last three months, she kept herself busy with various things, including singing. She recently released her first song, "Candle", as a singer, explaining that "Candle" is a symbol of hope, positivity and faith for her.

"'Candle' signifies so many things. So we talked about candle in the song. Now when I look around, there is hopelessness and uncertainty. I had never thought that we would face something like this," she said referring to the pandemic. "So I thought this was the time when people needed that positivity. The feeling that everything is going to be okay. If we stay strong, we will all come out of this together and stronger," she added. She has always been interested in singing but it took her a while to do it professionally.

"I was so busy. We used to do two to three shifts every day. We used to do a lot of films at the same time. We used to go from one studio to another. Now that I got a little time and it is also close to my heart, that's when I actually did it," said Madhuri. She hopes this is not her last song. "I would love to sing more but right now I am concentrating on this. I am seeing the feedback, what people think, then we will take it from there," she said.

Lockdown hasn't been just about work for her. She also celebrated her birthday. "You know birthdays -- sometimes you go out, sometimes you have friends over, this year it's been like pretty quiet which I don't think is bad either. It was an intimate thing with mom, kids and husband. It was fun in a way. I didn't really miss anything. I enjoyed my birthday this year.

(The above story first appeared on LatestLY on Jun 11, 2020 11:28 AM IST. For more news and updates on politics, world, sports, entertainment and lifestyle, log on to our website latestly.com).