Kick 2 Major Update: Jacqueline Fernandez Will Star in the Sequel With Salman Khan

Salman Khan will be teaming up with Jacqueline Fernandez again for the second instalment of Kick. Producer-director Sajid Nadiadwala recently confirmed the same in an interview. Salman and Jacqueline were last seen together in Race 3, this will be thier third film together. 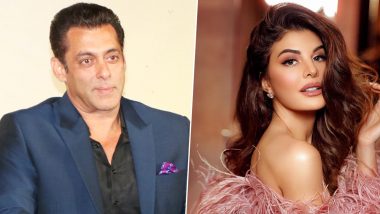 After Salman Khan's film with Sanjay Leela Bhansali, Inshallah got shelved, the actor had made an announcement that his other film, Kick 2 will be releasing over Eid 2020. However, director-producer Sajid Nadiadwala later confirmed that the film will not be releasing on Eid 2020 since he's still finishing the script of the film. Kick starring Salman Khan, Jacqueline Fernandez, Randeep Hooda and Nawazuddin Siddiqui was a remake of the 2009 Telugu film by the same name, which released in 2014. Salman Khan-Prabhudheva's Film 'Radhe' To Release on Eid 2020?

Ever since the sequel was announced, there have been talks about the film's leading lady and whether actress Jacqueline Fernandez will be reprising her role from the original film. Well, we finally have an update on it. In his recent interaction with Bollywood Hungama, Sajid Nadiadwala almost confirmed that Jacqueline will be starring in the sequel. When asked about her casting, he simply said, "Jacqueline should be there, yes.”

Fans had loved Jacqueline and Salman's chemistry in Kick and will certainly be happy that the duo will be returning for the sequel. Rumours about Jacqueline being replaced first hit the stands after Salman joked at an awards ceremony that Jacqueline Fernandez was “kicked” out of Kick 2. This came as a shock to everyone and the actress had later even given a statement saying, "Well I was not even aware that a sequel of the film has been planned. If Salman has said that (that she will not be a part of the film) then that's fine. He's done a lot for me. Hope we team up soon for a film."Kick 2 Starring Salman Khan Will Not Release on Eid 2020, Confirms Sajid Nadiadwala.

According to reports, the film will be shot in India and abroad. Considering Kick was a huge success at the box office, the sequel too may turn out to be a massive money-spinner.

(The above story first appeared on LatestLY on Sep 18, 2019 08:03 PM IST. For more news and updates on politics, world, sports, entertainment and lifestyle, log on to our website latestly.com).