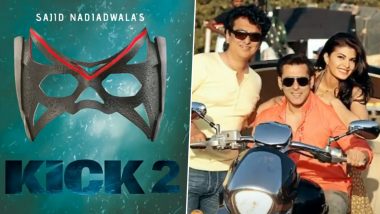 All that back and forth about Salman Khan and Jacqueline Fernandez's Kick sequel not happening is not true after all. On the occasion of Jacky's birthday on August 11, 2020, Nadiadwala Grandson officially announced Kick 2, starring Sallu and Jacky in the lead roles. In fact, the logo of Kick 2 was also released in the video announcement, along with pictures of Sajid alongside Salman and Jacqueline from Kick. The movie's business at the Box Office broke quite a few records. Kick 2 Major Update: Jacqueline Fernandez Will Star in the Sequel With Salman Khan.

Back in March, a report mentioned how Sajid Nadiadwala was waiting for an idea to strike for Kick 2 but was unable to and hence did not have a script also. However, the announcement tweet revealed that Sajid had in fact locked the script for the movie at 4 am today (August 11, 2020) and that they couldn't wait for Salman and Jacqueline to start 'Kick-in'. Salman Khan Fans Start Trending Kick 2 on Twitter after Sajid Nadiadwala Promises an Exciting Announcement Tomorrow.

Too Much Fun 😎 on @Asli_Jacqueline’s birthday, the wait ends as #SajidNadiadwala locked the script for #Kick2 this morning at 4 am. @WardaNadiadwala Thank you for the BIG News 🥰🤩 #NGEFamily can't wait to see @BeingSalmanKhan & Jacqueline start #Kick-in soon!🤩 pic.twitter.com/6BQ2WbpvxS

Back in February, when Nadiadwala teased fans with a big announcement, fans were quick to speculate that it would be about Kick 2, but the announcement turned out to be for Tiger Shroff's Heropanti 2. But fans have finally got their wish on Jacky's birthday. Kick 2 is official guys and this is the fifth film that Salman Khan has in his kitty, apart from Radhe, Guns of North, Kabhi Eid Kabhi Diwali and Tiger 3. Excited???

(The above story first appeared on LatestLY on Aug 11, 2020 09:50 PM IST. For more news and updates on politics, world, sports, entertainment and lifestyle, log on to our website latestly.com).