Will Sajid Nadiadwala officially announce Kick 2 tomorrow morning at 11:00 am? 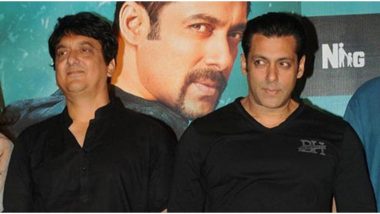 Well, well, the next few hours are gonna be extremely difficult for all Salman Khan for Sajid Nadiadwala has promised to make an exciting announcement. Now when the producer turned director insists on having something crucial in his kitty, the immediate thought that runs into your mind is an update on Kick 2. Nadiadwala made his directorial debut with Salman's Kick in 2014 and the film was a huge success, minting more than Rs 200 crore at the box office. It was also the actor's first release to enter this club. Since then all Bhai fans are eagerly waiting for a sequel and seems like the long wait is about to end tomorrow. Bigg Boss 13 New Promo: Salman Khan CONFIRMS Jacqueline Fernandez Is In Kick 2 (Watch Video).

Sajid Nadiadwala took to Nadidwala & Grandsons' twitter account to make an exciting announcement coming our way at 11:00 am tomorrow (Friday, Feb 28) morning. While this could be an announcement of any of his upcoming production venture, Salman fans are dead sure about it being for Kick 2. Check out their exciting tweets that will get you the right emotions. Is Salman Khan’s Movie with Aayush Sharma a Remake of the Marathi Film Mulshi Pattern?

The Guy is Futuristic

Kick 2 #Kick2 release date will be announced tomorrow with logo

Those of you who want it to be kick 2 hit the like button https://t.co/yZGilCGUya

Hopefully, Salman Will Read this Suggestion

May be salman khan again next movie..

Salman should announce his movie like marvel for 2-3 years

Nope, This is Certainly Not Happening

Raise Your Hands if You Want Kick 2

While Sajid had already confirmed about collaborating with Salman for Kick 2, this could be an official announcement with a release date. "I had started writing this film even before I started with Kick 2. Salman and I are collaborating after six years and it feels just like our Judwaa days back then. Kabhi Eid Kabhi Diwali is a film with a very different approach and we are sure the audience will love to see Salman in the avatar we have planned," the filmmaker had earlier said in a statement. Well, let's keep our fingers cross and hope for it to revolve around Kick 2.

(The above story first appeared on LatestLY on Feb 27, 2020 08:44 PM IST. For more news and updates on politics, world, sports, entertainment and lifestyle, log on to our website latestly.com).