KK Dies at 53: From 'Yaaron' to 'Aankhon Mein Teri', 20 Soulful Songs Sung by the Late Singer That Will Live With Us Forever! (Watch Videos)

KK passed away in Kolkata after doing a live performance in the city. The singer is responsible for some of the best melodies this side of the century when it comes to Bollywood. 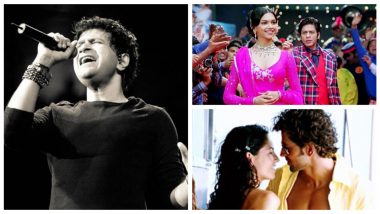 There are some lists that break you down while writing them. For this writer, this list is such. On May 31, 2022, singer Krishnakumar Kunnath, more popularly known as KK, passed away in Kolkata after being in the city for a concert. He was 53. If you are someone who has grown up drinking in Bollywood's music of the '90s and the '2000s, it would be hard to miss a song by this gentleman and the owner of one of the most melodious voices you have ever heard. From Rockford's "Yaaron" to Bachna Ae Haseeno's "Khuda Jaane", KK has sung some of the most melodious ditties this side of the millenium. His demise is a true loss for all music lovers. Singer KK Dies After Live Performance in Kolkata: Bollywood Playback Singer Passes Away at The Age of 53.

It is hard to curate his best songs, but we must filter out some very favourites as we compile 20 of our most loved KK songs. He might have gone, but KK has left for us a treasure cove of lilting songs for which we are always grateful for him.

The most soulful friendship anthem ever composed and sung...

It is hard to hold back tears if you are listening to this song now... KK Dies at 53: Video From Singer's Last Concert in Kolkata Where He Sings 'Hum Rahe Ya Na Rahe Kal' Is Going Viral and It Is Breaking His Fans' Hearts.

The most heartbreaking song ever...

The go-to song for every male who nursed a broken heart, perhaps even now...

The best song of an awesome soundtrack...

Before he gave rousing scores to SS Rajamouli movies, MM Keeravani did some soulful songs in Bollywood, and this melancholy ditty, sung by KK, is one of his best compositions here.

A beautiful underrated track from a forgotten comedy...

Your heart and your ambitions still rouse when you hear this amazing inspiring track!

Another underrated song from an underrated film. Add this to your playlist if you love soulful melodies.

The heartbreak when you realise that the singer and the actor in this track are both no more...

This whole soundtrack is quite lovely with KK singing most of the tracks, but this track is an absolute standout. Singer KK Dies at 53: Ajay Devgn, Shirley Setia, Shriya Pilgaonkar and Other Celebs Tweet Their Condolences Over the 'Pal' Singer's Demise.

An easy melody that plays with your heart, and KK's soulful vocals doing rest of the magic...

A peppy track that was quite the hit then, but deserves more listeners now...

Not exactly an original track, but for KK's voice, we forgive that misdemeanor...

For some reason, Pritam didn't borrow this beautiful song in the sequel, Bhool Bhulaiyaa 2.

A lovely gem of a track in an underrated soundtrack...

KK's gushy vocals made us fall in love with Deepika Padukone...

VS did reserve some of their best melodies for KK, didn't they?

The movie might not be among Hrithik Roshan best works, but it has one of the actor's best romantic tracks, and it is, of course, sung beautifully by our very dear KK. We will miss you, KK, rest in peace!

(The above story first appeared on LatestLY on Jun 01, 2022 08:41 AM IST. For more news and updates on politics, world, sports, entertainment and lifestyle, log on to our website latestly.com).