Kubbra Sait found her doppelganger match in House actress Lisa Edelstein and now, wants to have coffee with her. 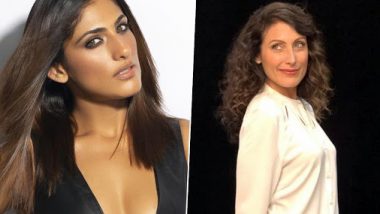 There's a saying that there are 7 people in the world who look the same as you. As scary as it sounds, there have been real life incidences where someone looked exactly like the other even without any lineage. Sacred Games actress Kubbra Sait too has found a doppelganger match in Lisa Edelstein. Many of you who have watched House, have seen her as Dr Lisa Cuddy. The resemblance is so stark that Kubbra now wants to meet her for coffee. Although retweeted it, she hasn't accepted the coffee invite yet.  The Verdict Trailer: Sumeet Vyas, Elli AvRram, Angad Bedi, Kubbra Sait’s Performances Increase Expectations From The Web-Series! (Watch Video)

We feel this meeting should be recorded because it's not always that you get to meet your twin who is completely unrelated to you. Lisa too believes Kubbra looks like her 16 year old self and we are happy to be part of this mutual admiration club. Check out the fun Twitter banter here...

What is more interesting is one user is repeatedly trying to prove that he was the first one to point out the similarities between the two actresses. In fact, Kubbra had acknowledged it once.

Pointed it longgggg ago ☺️ pic.twitter.com/XXjWNg7vKl

So it's not just Kubbra or Lisa, but the regular people on Twitter too are quite fascinated by this similarity. Now we are waiting to see when this coffee meeting happens and we can have both of them in the same frame.

(The above story first appeared on LatestLY on Nov 03, 2019 12:35 PM IST. For more news and updates on politics, world, sports, entertainment and lifestyle, log on to our website latestly.com).