Laal Singh Chaddha: Vijay Sethupathi Reveals Why He Could Not Be a Part of Aamir Khan’s Film, Says Losing Weight Was Never the Reason

Sethupathi was supposed to lose 25 kgs and several reports suggested that since he neither lost the extra kilos nor did he show much commitment towards it, Aamir removed him from the project. 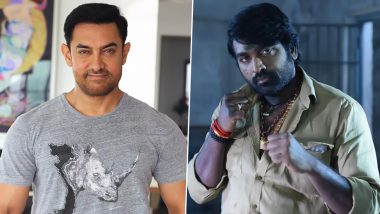 Laal Singh Chaddha is a dream project for many reasons. Not only will we see Aamir Khan after a long time but the film will also reunite Aamir with Kareena Kapoor Khan. But while the fans are excited to see the two stars on the screen, many were dishearted to know that South star Vijay Sethupathi won's be a part of the film. Vijay was offered a key role in the film but rumours had it that he was removed from the project because he was asked to lose weight which the actor was not ready to do. Did Aamir Khan Replace Vijay Sethupathi In Laal Singh Chaddha Due To A Few 'Extra Kilos'?

Vijay Sethupathi, however, quashed these rumours and revealed that the reason behind him not being a part of Laal Singh Chaddha was something else. He told Bollywood Hungama, "I am very comfortable with my body and my mind. Whichever project I go into, they go with me.” He added that he has always had the highest regard for Aamir Khan as an actor and his selection of roles always inspired Vijay to attempt something different every time. "When I got to know him personally for Laal Singh Chaddha I was even more impressed by his humility and knowledge of cinema. Just being with him is a learning experience," added the superstar.

He went on to reveal how Aamir had personally offered him the role and narrated the whole incident. He told that Aamir flew down to a small town in Tamil Nadu where Vijay was shooting for a film and narrated the script to him. He added, "For some reason, the director Advait Chandan couldn’t come. Aamir Sir came alone, narrated the script and stayed overnight in that town and left the next morning. Such a big superstar and no airs. And he is a marvellous storyteller. The way he narrated the story was mesmerizing. I immediately said yes.”

Breaking the silence on his exit from the film, Vijay revealed that it was he pandemic to be blamed for it. He said the Covid ransacked all the plans. After the lockdown, he had five Telugu projects in various stages of production to complete and hence he couldn’t accommodate Laal Singh Chaddha in his schedule. Vijay went on to praise Aamir for his kindness and his knowledge of cinema. "It would be an honour and a pleasure to work with him sometime in the near future,” concluded the actor. Laal Singh Chaddha: Aamir Khan Is Shooting for His Upcoming Film in Shimla.

Sethupathi was supposed to lose 25 kgs and several reports suggested that since he neither lost the extra kilos nor did he show much commitment towards it, Aamir removed him from the project. Laal Singh Chaddha is the official Hindi adaptation of Tom Hanks's Forrest Grump and Sethupathi was playing the role of Indian Benjamin Buford “Bubba” Blue. Now, Manav Vij is said to have taken up Sethupathi's role.

(The above story first appeared on LatestLY on Feb 16, 2021 01:11 PM IST. For more news and updates on politics, world, sports, entertainment and lifestyle, log on to our website latestly.com).