Kunal Khemu will star in the comedy movie, Lootcase. The first trailer of the film backed by Fox Star Studios was dropped on the internet way back in 2019. 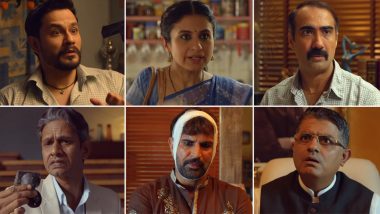 Kunal Khemu will star in the comedy movie, Lootcase. The first trailer of the film backed by Fox Star Studios dropped on the internet way back in 2019. However, the film got delayed due to some reasons as will now release on an OTT platform directly. The makers unveiled the same trailer with their new announcement (about direct-to-web release) and as we previously said, the footage looks promising and delivers a few laughs. At least with the array of talented actors, we can be sure that the dialogues will be delivered perfectly and the jokes will land.

Apart from Kunal, Lootcase also stars Rasika Dugal, Ranvir Shorey, Gajraj Rao and the utterly funny, Vijay Raaz. The story follows Kunal's character Nandan Kumar, who comes in possession of a suitcase with loads of money in it. Certain criminally inclined people are also after the particular suitcase. Rest is easy to imagine. Film Like ‘Golmaal’ Only Works Because of All of Us: Kunal Khemu.

The basic idea of Lootcase doesn't sound new. In fact, Vijay Raaz has played a funny character in a movie with a similar premise, Delhi Belly. But maybe the makers of Kunal starrer have spun the idea in a new way. We'd have our answers when the movie releases on October 11. The comedy movie will be clashing with Priyanka Chopra's The Sky Is Pink. Soha Ali Khan and Kunal Kemmu Look Every Bit Royal For a Magazine Shoot - View Pics.

Rajesh Krishnan has directed Lootcase. He has previously directed the hit web-series, TVF's Tripling. Well, that is one more reason to look forward to the movie. But it will be tough for the Kunal Khemu starrer to hold ground with Priyanka's film playing along in theatres. The film will release on Disney+ Hotstar on July 31.

(The above story first appeared on LatestLY on Sep 19, 2019 02:38 PM IST. For more news and updates on politics, world, sports, entertainment and lifestyle, log on to our website latestly.com).