Maanagaram: Vijay Sethupathi To Play A Pivotal Role In The Hindi Remake Of The Tamil Hit Film?

Santosh Sivan had recently confirmed that he would be helming the Hindi remake of Lokesh Kanagaraj’s Tamil film Maanagaram. 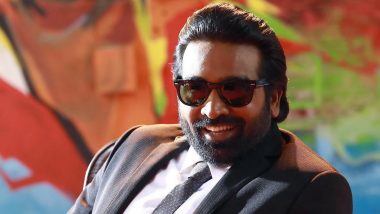 Santosh Sivan is the popular cinematographer and director known for his works in Malayalam and Tamil cinema and also Hindi Cinema. The 56-year-old has received 11 National Film Awards for his works in the world of cinema. It was recently when Santosh had confirmed that he would be helming the Hindi remake of Lokesh Kanagaraj’s Tamil film Maanagaram. Sri, Sundeep Kishan and Regina Cassandra had starred in the lead in the Tamil film. It was earlier stated that Vikrant Massey has been roped in to play the lead role and now the buzz is rife that Vijay Sethupathi has bagged a pivotal role in the Hindi remake of Maanagaram. Muthiah Muralidaran Biopic: Vijay Sethupathi To Play The Titular Role In MS Sripathy’s Directorial.

There has been no official announcement on the complete casting of Maanagaram. But reports suggest that Vikrant Massey would be stepping into Sundeep Kishan’s role in the Hindi remake. Talking about Vijay Sethupathi roped in to play a key role, a source revealed to TOI, “Vijay Sethupathi, who has signed the project on Thursday, will be seen enacting a pivotal character which was there in the Tamil version. He will be lending his own voice for the role. Veteran actor Sanjay Mishra will also be playing a significant character in the movie. Though the basic storyline of Maanagaram has been retained, the makers have given more detailing to each character.” Vijay Sethupathi To Debut In Bollywood With Aamir Khan's Laal Singh Chaddha.

Maanagaram has not gone on floors yet and the makers are reportedly planning to share the title of the film before it. The makers are planning for a theatrical release of Maanagaram Hindi remake in June next year. Stay tuned for the official update!

(The above story first appeared on LatestLY on Oct 10, 2020 09:44 AM IST. For more news and updates on politics, world, sports, entertainment and lifestyle, log on to our website latestly.com).