Vijay Sethupathi will debut in Bollywood with Aamir Khan's Laal Singh Chaddha. He confirmed the same on a chat show. 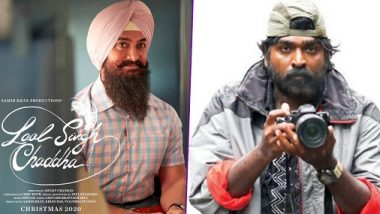 Vijay Sethupathi has become one of the most popular actors from down South with kind of versatility he promises. So when we heard about his Hindi film debut, we were doubly excited. On a discussion with fellow actors on Film Companion, Sethupathi confirmed that he is a part of Aamir Khan's Christmas 2020 bonanza Laal Singh Chaddha. He also mentions what fears plague him when it comes to working in a different industry. He points out language and culture as two of the things that he is a bit wary about. Indian 2 Update: Vijay Sethupathi to Play a Negative Role in Kamal Haasan Starrer?

If you remember,  Vijay at the Indian Film Festival Of Melbourne confirmed to PTI that he is collaborating with Aamir Khan but mentioned that the details have not been finalised yet. Guess now the deed has been signed and Vijay is officially on board. Check out the interview here...

RT If You Can't Wait to See them on Big Screen. pic.twitter.com/ewHH6UY9XF

Recently, Aamir revealed the first look of Laal Singh Chaddha. It has him wearing a pink turban with a long beard, looking quizzically ahead with a smile. The film is directed by Advait Chandan and is a remake of Tom Hank's 1994 hit Forrest Gump. There are reports that Aamir will play Sethupati's character in the Vikram Vedha remake. Things are definitely getting more and more interesting in the film world.

(The above story first appeared on LatestLY on Nov 26, 2019 12:51 PM IST. For more news and updates on politics, world, sports, entertainment and lifestyle, log on to our website latestly.com).