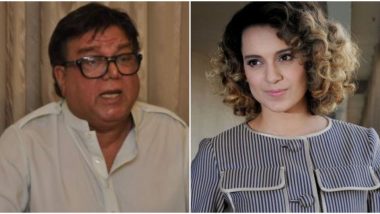 "Our family and Meena Kumari have goodwill and a stupid girl like Kangana cannot smear the reputation of our family. Kangana took the name of my mother during a conversation on a TV channel and said that she performed halala. She has no idea that Meena Kumari and my abbu Kamal Amrohi both were Shia Muslims and halala never happens in Shia Muslims,” he said while lashing out at the actress.

Accusing the Queen actress of afflicting trauma on his family, Tajdar Amrohi said, “I have said this several times and I am repeating myself again. Hearing the same thing again and again about my mother upsets me. Kangana’s stupidity has again led to discomfort." Kangana Ranaut Announced as BJP's West Bengal CM Candidate? Fake News Debunked.

While slamming the actress for not getting her facts right, Amrohi said, "At least one should find the truth before making any negative statements about someone’s family. Kangana should not speak untruths and apologise to our family. This will clear the misconception which people have."

Revealing the reason for why he won't be taking any legal action against the actress, Amrohi said, "Kangana says that she left her home at the age of 15, which means that she has not completed her studies. Because she is uneducated and illiterate, I am not taking any legal action. Otherwise, I would have filed a defamation case against her. Time and again, she plays the woman-card to be in the news."

He further added that he doesn't like talking about these things but after Kangana Ranaut raised the issue recently, he was compelled to talk about it.

(The above story first appeared on LatestLY on Sep 20, 2020 09:05 AM IST. For more news and updates on politics, world, sports, entertainment and lifestyle, log on to our website latestly.com).