Shahid Kapoor's wife, Mira Rajput takes sweet revenge with hubby dearest and yes it will you giggle for sure. Check it out! 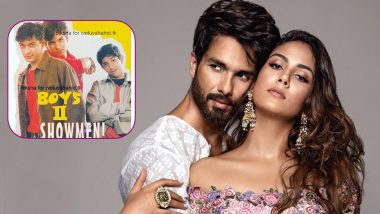 Bollywood couple, Shahid Kapoor and Mira Rajput are having a gala time in their quarantine time. As the power duo have been keeping their fans hooked by posting cheesy, goofy and adorable posts on social media. Mira often shares glimpses of Misha as well as some food items and tells her admirers what's on her mind. However, it was Shahid Kapoor this time who took to Instagram and had shared a video in which he was seen teasing Mira by calling her 'sexy sexy'. Well, Mira was not interested in the man's sexy talk and had warned him that, “Revenge is in the mail.” Mira Rajput Isn't Interested In Hubby Shahid Kapoor's 'Sexy' Talk Shenanigans (Watch Video).

It so happened that recently Mira took to IG and shared a post which will surely embarrass Shahid. The lady shared a poster in which we can see Shahid from his teenage days looking cute AF. The poster also sees actors Rohan Dey and Vatsal Sheth. “Revenge is sweet," she captioned the picture. We love this banter between the couple online, as it's adorable and how. While Mira's aim was to shame Shahid, the star's fans were all aww after seeing the old photo. Mira Rajput’s Pic With Son Zain Kapoor Is Adorable, but Those Tic Tac Hair Clips on the Toddler Is Making Netizens Go Gaga.

Check Out The Post Shared By Mira Rajput Below:

We wonder, what will be Shahid Kapoor's take on this sweet revenge by his wife? Meanwhile, Mira has been quite active on social media and updates fans about her fam's whereabout's even amid the lockdown. Coming back to Mira's post, we guess her revenge was subtle, right? Stay tuned to LatestLY for all the updates from the showbiz!

(The above story first appeared on LatestLY on Apr 19, 2020 03:45 PM IST. For more news and updates on politics, world, sports, entertainment and lifestyle, log on to our website latestly.com).