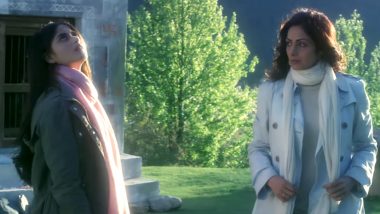 Sridevi's last film Mom, which turned out to be a critical and a box office success in India, released in China on Friday, May 10. Co-starring Nawazuddin Siddiqui, the crime thriller opened well at the China box office as it raked in Rs 11.47 crore beating Ayushmann Khurrana's black comedy thriller Andhadhun's record. The film continued to perform well on day 2, Saturday and the scenario remained pretty much the same on Sunday as well. The film ended its opening weekend in China on a good note as it collected Rs 41.81 crore in the first three days which is very impressive. Sridevi Starrer Mom Releases in China: Hope People Are Happy With the Film Says an Emotional Boney Kapoor.

Further, Boxofficeindia.com  has reported, "Monday will tell where this film can go in China and it should hold well enough as that limited drop on Sunday suggests the film should get more than 50% of its Friday figure and might even be able to be around $1 million which would give it a chance of a good run. Even if the film was only to double up from here it would mean a better run in China than India." Sridevi Starrer ‘Mom’ To Release in China on May 10 as a Tribute to All Mothers

(The above story first appeared on LatestLY on May 13, 2019 12:36 PM IST. For more news and updates on politics, world, sports, entertainment and lifestyle, log on to our website latestly.com).