Namaste England Set For Dussehera 2018 Release : Ishaqzaade Parineeti Chopra and Arjun Kapoor Will Make You Fall In Love Again With This Poster! 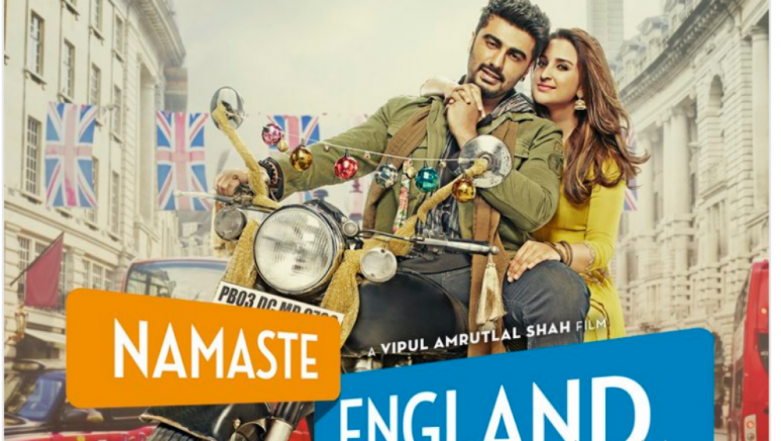 We had informed you how the release of Arjun Kapoor and Parineeti Chopra-starrer Namaste London had been preponed for October 19, 2018 during the Dussehra weekend.  Directed by Vipul Amrutlal Shah, the sequel to 2007's hit Namastey London was scheduled to be released in December. And now Parineeti Chopra has tweeted this to surprise us.

In the poster we the Inshaqzaade jodi on a super cool bike. While Arjun is seen taking Pari for..well a ride. The two look absolutely head over heels in love with each other as they are casting a loving gaze into the camera. While the tile of the film is Namaste England, we loved Pari's desi avatar even while Arjun Kapoor is seen in a rather western mood as far as his dressing sense is concerned. The Union Jack seen in the backdrop give the much needed English flavour to the visual.

Owing to the smooth shooting schedule, the makers have decided to release the movie earlier to the planned date. The film has also been shot at over 75 locations, including in Dhaka, Paris, Brussels and London. This film marks Vipul's return to direction after eight years.The team of Namaste England have filmed in never-seen-before locations of Punjab too. They recently wrapped up their last shooting schedule. The film traces the journey of two young individuals from Punjab to England.

Arjun and Parineeti are all set to reunite after "Ishaqzaade".

"Dussehra it is! #NamasteEngland," had tweeted Parineeti earlier.