Neil Nitin Mukesh Birthday Special: From Johnny Gaddaar to Saaho, Best Performances of the Actor That Prove His Versatility and How!

From Johnny Gaddaar to Saaho, if you've noticed Neil Nitin Mukesh's growth it has been immense and we adore him for the same. And as he celebrates his 37th birthday today, we thought of highlighting 5 of his best performances so far which shows his calibre and how. 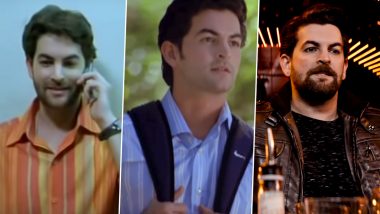 Actor Neil Nitin Mukesh might not have many blockbuster films to his credit, but that has not stopped the lad from performing on the celluloid. With few hits and flops in his career so far, Neil has aced the art of being a versatile star. And why do we say this? As he has got the talent of portraying the role of a hero as well as a villain with equal ease in his movies. Having said that, the actor has always delivered in each of his films, whatsoever the outcome might be at the ticket window. Bypass Road Quick Movie Review: Neil Nitin Mukesh's Mystery Film is Intriguing.

FYI, the actor has been in the showbiz for over a decade now and has comfortably created a niche for himself. From Johnny Gaddaar to his latest one Saaho, if you notice the actor’s growth, it’s immense and we adore him for the same. And as Neil celebrates his 37th birthday today, we thought of highlighting 5 of his best performances so far which shows his calibre and how. Neil Nitin Mukesh Talks About Challenges While Portraying Wheelchair Bound Character In Bypass Road.

Keeping fans glued with the intensity of his acting prowess, Neil made his Bollywood debut with Sriram Raghavan's thriller Johnny Gaddar. His act as a not so regular killer bashing up the goons was loved by audiences and critics alike. For this one, he earned himself a Filmfare Award for Best Debut Male nomination.

The actor paved his way into the hearts of critics and audiences by flashing his acting as Omar in this one. He played the role of an Indian immigrant and his journey in the movie was worth a watch.

Trust us, even we were uncertain about Neil pulling off this role, but the man surprised us. With a very unique love story that of a blindfolded street fighter (Neil) and a blind dancer (Deepika Padukone), both the stars gave a kick-ass performance in this flick which needs everyone's attention and how.

This film saw the birthday boy at his finest, but sadly it got no attention amidst big releases. As a child with no parents (orphan), the actor delivered a stellar performance which had the right balance of chaos and style.

Starring Prabhas as the male lead, the most anticipated film saw Neil as a baddie. A modern-day villain with the right attitude and killer prowess. Hands down, we can say that Neil portrays the role of a bad body on the silverscreen better than a hero.

So, what’s your take on the top 5 performances of the actor mentioned above? We bet you cannot disagree with us. Share your thoughts about the same in the comment section below. Stay tuned!

(The above story first appeared on LatestLY on Jan 15, 2020 09:11 AM IST. For more news and updates on politics, world, sports, entertainment and lifestyle, log on to our website latestly.com).