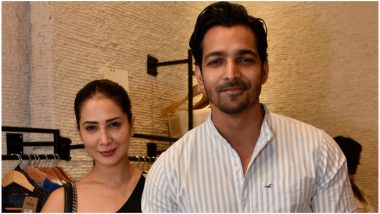 Actor Harshvardhan Rane, who was last seen in JP Dutta's war drama Paltan, is in the news for his love life. In an interview to Hindustan Times, Rane confirmed that he is dating Kim Sharma. This is quite refreshing, since most stars are not usually this frank about their love life. However, rumours of them dating has been going around with pictures that the couple being seen together at parties and their own private rendezvous. This Pic of Kim Sharma and Harshvardhan Rane Is Embarrassingly AWKWARD.

Speaking to HT, Harshvardhan revealed, "There’s nothing to deny obviously, we are seen everywhere. We haven’t kept anything hidden till now. Since this is not work-related, I don’t know how to talk about it much, or what to discuss about it."

Talking about how he doesn't mind his private life being discussed, Harshvardhan said, "I will say I am a very open person. There’s nothing to hide, I have never been a person to hide anything. Of course, I am in a relationship, but it’s a personal space. I am a private person. And as far as the other person is concerned, I have to respect them." He also revealed that Kim Sharma was with him to support during the screening of Paltan. Kim Sharma and Harshvardhan Rane Get Cozy As They Go on a Bike Ride - See Pics

Harshvardhan was earlier linked to Pakistani actress Mawra Hocane. Kim Sharma herself was earlier romantically involved with cricketer Yuvraj Singh before she got married to Kenyan-based businessman Ali Punjani. They got divorced in 2016.

(The above story first appeared on LatestLY on Dec 19, 2018 04:35 PM IST. For more news and updates on politics, world, sports, entertainment and lifestyle, log on to our website latestly.com).