Pooja Hegde 'Nervous' to Work With Salman Khan in Kabhi Eid Kabhi Diwali, Says 'Working With Stars May Be Intimidating'

Pooja has met Salman at social gatherings before this, but adds that to work with him she'd have to up her game. "He has been working for years, so I am nervous," she explains. 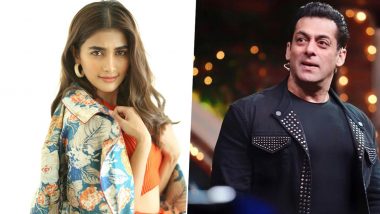 Salman Khan will be seen opposite Disha Patani in his next film, Radhe. After that, he will be seen in Sajid Nadiadwala's Kabhi Eid Kabhi Diwali, where he will be paired opposite, Poja Hedge, who made her Bollywood debut with Hrithik Roshan's Mohenjo Daro. Pooja is nervous about working with Salman. The actress opened up about her feelings in an interview with Mid-Day. Kajal Aggarwal and Pooja Hegde Roped In for Vijay Starrer Thalapathy 65?

Pooja has met Salman at social gatherings before this, but adds that to work with him she'd have to up her game.  "He has been working for years, so I am nervous," she explains. "Working with stars may be intimidating, but it is a learning experience for an actor [like myself]. The script is cool and funny."

Pooja also revealed that she has not been informed about the new schedule, after the August schedule of the film was thrown off due to COVID-19 pandemic. Pooja Hegde Is a Perpetually Happy Soul in Manish Malhotra Ensemble!

On the work front, Pooja was last seen in the reincarnation comedy, Housefull 4, alongside Akshay Kumar, Kriti Sanon, Bobby Deol, etc. The actress will also be seen in the Telugu film Most Eligible Bachelor starring opposite Akhil Akkineni. She also has movies like Jaan and Ala Vaikunthapurramuloo in her kitty.

The actress recently faced criticism over a leg fantasy sequence in the film, Ala Vaikunthapurramuloo. Explaining her side, she had said, "After swooning over her legs, the hero's character falls in love with her eyes. So, he progresses. That's subtle. The lyrics of 'Samajavaragamana' are about her grace and how beautifully she walks, not about the shape of her legs. There have been films that have sexualized the navel, for example. Compared to them, 'AVPL' doesn't do that." Ala Vaikunthapurramuloo starred her alongside  Trivikram Srinivas and Allu Arjun.

(The above story first appeared on LatestLY on Apr 12, 2020 07:20 PM IST. For more news and updates on politics, world, sports, entertainment and lifestyle, log on to our website latestly.com).