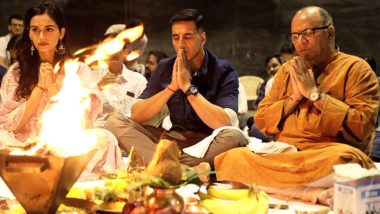 Akshay Kumar and Manushi Chhillar starrer Prithviraj Chauhan is all set to roll, we are not sure when now! However, the historical period drama has been one of the ambitious projects of the Bollywood actor with humongous sets and expensive making costs involved. The movie is also a debut film for former Miss World Manushi. However, in the wake of coronavirus pandemic, the shoot is at halt. In the latest development, the set is now even on the verge of getting demolished. Sanjay Dutt and Akshay Kumar to Work Together after Eight Years in Prithviraj Chauhan Biopic.

As per a report in Mid-Day, the architectural palace set up from 12th era was built up. A war sequence was scheduled to happen soon and the makers waited for the situation to cool down. However, with rainy season arriving, the makers are deciding to demolish it.

The source close to the development told the tabloid, "The head honchos of Yash Raj Films had kept the set standing over the past two months, hoping that the situation would improve soon. However, with the rains only weeks away, it doesn't seem feasible to retain the set any longer. The makers are currently procuring necessary permission to pull it down. Akshay had filmed a major portion of the Chandraprakash Diwedi directed drama at the Dahisar set before the lockdown was announced, but some crucial sequences have yet to be shot."

The makers are planning to set the same set indoors once the shooting resumes. Earlier, it was reported that the sets of Sanjay Leela Bhansali's Gangubai Kathiawadi was about to be demolished.

(The above story first appeared on LatestLY on May 26, 2020 10:10 AM IST. For more news and updates on politics, world, sports, entertainment and lifestyle, log on to our website latestly.com).