Priyanka Chopra-Nick Jonas, Alia Bhatt-Ranbir Kapoor, Deepika Padukone-Ranveer Singh: Will These Celebrity Couples Get Married by the End of 2018?

Do you think these couples will get hitched? 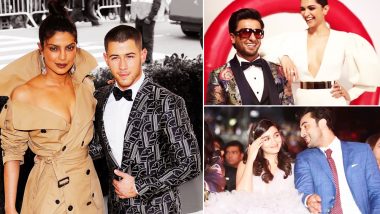 After Virat Kohli and Anushka Sharma and Sonam Kapoor and Anand Ahuja, all eyes are on Ranveer Singh and Deepika Padukone as they are expected to tie the knot by the end of this year. Celebrity weddings make it to the headlines no matter what and if the couple is as good-looking as Ranveer and Deepika, it is bound to be the hot topic of discussion!

While DeepVeer hasn't still confirmed their marriage yet, we have a few other couples who have been dropping major hints about marriage. No brownie points for guessing, we are talking about Priyanka Chopra and Nick Jonas and Alia Bhatt and Ranbir Kapoor.

So, without wasting much time, let's take you through 5 Bollywood couples who might get hitched by the end of this year!

Talk of marriage and RS and Dippy are the first names that come to our head! The duo has been going strong for the last five years and fans are eagerly waiting to see this gorgeous couple tie the knot. If reports are to be believed, Ranveer and Deepika will be getting married on November 10 this year. If that happens, this will definitely be THE biggest wedding of 2018!

The duo hit it off really well and before they knew they were in love! It's kinda strange but believable though. Ranbir and Alia have started dating only a few months back and they are already talking about marriage. I mean, Alia has been very vocal lately about getting married before she is 30 and RK too has hinted that he wants to have a wife and kids. All this coming up at this time, when the buzz around their relationship is so strong... doesn't it mean something?

The rumours of Varun and Natasha's marriage have been circulating since forever. Considering that the two have been in a steady relationship for quite some time now, we think they'd be tying the knot this year.

@priyankachopra walking around at #JFK with @nickjonas. All we want to know is whats cooking bro!! Are they a thing ? What do you guys think! Share your comments! #priyankachopra #nickjonas #celebsdating #aretheydayting #priyankanickjonas #hollywoodbollywood

A post shared by The Million Shades Of Life (@themillionshadesoflife) on Jun 8, 2018 at 3:14pm PDT

Now you might say that's it is way too early to think about PeeCee and Nick's marriage but but but, don't forget, it is Nick who has apparently shown interest in walking down the aisle with Priyanka. They're already meeting each other's families and if reports are to be believed, the couple might soon move-in together.  “Nick is telling pals that Priyanka is the one and he’s asked her to move in with him. Nick loves that Priyanka is older and more mature than his exes. There’s no game playing. They have a really easy relationship," a source was quoted saying recently. Well, we couldn't be any happier for the two of them!

(The above story first appeared on LatestLY on Jun 22, 2018 10:41 AM IST. For more news and updates on politics, world, sports, entertainment and lifestyle, log on to our website latestly.com).