Even after getting a mixed response from the critics, Radhe has received tremendous love from fans. As reportedly, the Salman Khan film has minted close to $2 million in the international box office. Check it out. 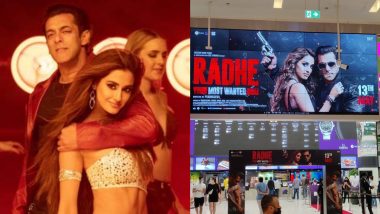 Salman Khan and Disha Patani's film Radhe: Your Most Wanted Bhai released on Eid 2021 (May 13). While in India due to the coronavirus scare, the actioner was out on the OTT platform (ZEEPlex) whereas internationally it was released in Australia, the USA, and UAE in theatres. To note - even after getting a mixed response from the critics, this Parbhu Deva-directorial has received tremendous love from fans. As, reportedly, the film has minted close to $2 million in the international box office. Radhe, Race 3 and More – 7 Worst-Rated Movies Featuring Salman Khan As the Lead on IMDb (LatestLY Exclusive).

Breaking the total, Radhe has turned out to be a winner in the Gulf Market and churned $1million. In Australia, bhaijaan has managed to get in decent numbers with a weekend collection of $350,000 while in the USA it stands at $200,000. Well, keeping the current situation in mind, the box collections are not at all bad. The numbers further may also show an increase following the Eid festivities. Radhe Movie Review: Salman Khan and Disha Patani’s Tone-Deaf Remake of The Outlaws Is Terribly Dated! (LatestLY Exclusive).

Not just theatres, Radhe also attracted many viewers on the digital platform. As claimed by the makers, their movie ringed in 4.2 million views across platforms on day 1. Seems like Salman Khan has revived the market once again with his Eid release. Radhe: Salman Khan Reminds Fans Watching Movie Illegally Is a Serious Crime; Says Cyber-Cell Is Taking Down Illegal Piracy Sites.

Lastly, even after Salman saying no to piracy, his film Radhe was leaked in HD on pirated websites. To which, the actor had bashed at the ones dealing in piracy and also warned them with legal action. The movie also stars Randeep Hooda and Jackie Shroff. So, have you watched Radhe? If yes, tell us your thoughts on the film in the comment section below. Stay tuned!

(The above story first appeared on LatestLY on May 17, 2021 04:01 PM IST. For more news and updates on politics, world, sports, entertainment and lifestyle, log on to our website latestly.com).