And filmmaker Ram Gopal Varma is at it again. RGV, who has not taken a beat even during the lockdown and has created various films of all genres, has now laid his eyes on newsman Arnab Goswami. titled Arnab: The News Prostitute. 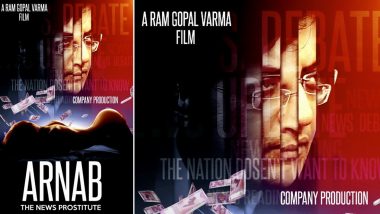 And filmmaker Ram Gopal Varma is at it again. RGV, who has not taken a beat even during the lockdown and has created various films of all genres, has now laid his eyes on newsman Arnab Goswami. A few days back, when Arnab was back to shaming Bollywood for its various notorieties, an angry Ram Gopal Varma, called out film personalities like Karan Johar, Salman Khan, Aditya Chopra and Shah Rukh Khan for 'not pulling up Arnab for his insult of the industry. In fact, RGV even used his rant to announce a movie on Arnab, which he titled Arnab: The News Prostitute. Ram Gopal Varma Calls Out Karan Johar, Shah Rukh Khan, Salman Khan For Not Reacting To Arnab Goswami's 'Falsifications'; Announces A Movie Titled Arnab The News Prostitute.

RGV's The rant had everything to do with how Bollywood has come under the scanner ever since Sushant Singh Rajput died by suicide on June 14 and nepotism in the industry was said to be one of the main reasons of the actor's depression. And now, the filmmaker has also released the movie's first poster. Ram Gopal Varma Booked for Upcoming Movie 'Murder'.

This Is The First look poster THE NATION WILL KNOW what THE NATION WANTS TO KNOW. pic.twitter.com/Cs17ZxacY5

In his rant, RGV mentioned how the Biggies of Bollywood should speak up against Arnab and change the narrative from an Anti-Bollywood to pro film industry in the current times. In fact, when announcing the movie, RGV revealed that he was contemplating calling Arnab The News Pimp or Prostitute and that both were relevant to address Arnab (his words... not ours). He also (we don't know if he meant it cheekily or seriously) revealed how his film would benefit from all the publicity, if Arnab chose to react to his film announcement. Well, your thoughts on the subject matter??

(The above story first appeared on LatestLY on Aug 12, 2020 10:20 PM IST. For more news and updates on politics, world, sports, entertainment and lifestyle, log on to our website latestly.com).