Rani Mukerji's Mrs. Chatterjee Vs Norway: Here's What We Know About The Film Based On A True Story

On Rani Mukerji's birthday today, Mrs. Chatterjee Vs Norway has been announced with the actress playing the protagonist's role. Deadline suggests that it is based on a true incident from 2011 where the children of an Indian couple in Norway were taken away from them by the welfare services. 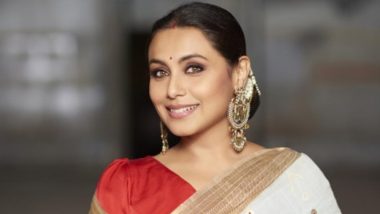 On Rani Mukerji's birthday today, a new movie was announced named Mrs. Chatterjee Vs Norway. As per Deadline, it is based on a true story from 2011 where the kids of an Indian couple were taken away from them by the Norway Welfare Services. The movie is produced by Emmay Entertainment alongside Zee Studios. Rani in her statement, "I started my career with Raja Ki Aayegi Baraat, which was a woman-centric film, and coincidentally in my 25th year, I’m announcing a film that is also centered around a woman’s resolve to fight against all odds and take on a country. Mrs. Chatterjee vs Norway is a story of true human resilience and it is a film that is dedicated to all the mothers out there." This obviously made everyone curious about what is this true story. Well, don't worry we got you covered. Rani Mukerji Birthday Special: From Traditional Drapes to Modern Cuts, She Believes in Acing Them All (View Pics)

If what Deadline reports is true about the plot, then you need to know a few things about it. The story dates back to 2011 when Sagarika and Anurup Bhattacharya's kids Abhigyan (2) and Aishwarya (3) were taken away from them by the Norway welfare services alleging extreme parental neglect. After intervention by the Indian Government, the kids were sent back to India in 2012 from the foster homes to their paternal uncle.

Soon enough the couple decided to get a divorce and it was alleged that Sagarika has severe psychological issues. Documents attained from Stavanger Municipality by Hindustan Times in 2012 had a detailed account of how Abhigyan responded every time he saw his mother. One of the sections of the judgment passed by the Stavanger Court reveals, "When the personnel (an employee of the Kvaleberg/Vannassen Kindergarten, Family group) are going to give Abhigyan to his mother, he clings on to the personnel and would not let her go. He makes no sound. The mother takes him, Abhigyan wriggles, becomes "eel-like", and the mother lets him slide down to the floor. There he starts banging his head on the floor." The court also pulled up the father Anurup asking about his priorities and eligibility as a care-giver.

A Pravasi Today website published Sagarika's side of the story which described what happened on that day in May 2011 when their kids were taken away from them. The note also described how Anurup tried to keep her away from gaining custody of their kids.

Well, if this is the story of Mrs. Chatterjee Vs Norway, then Rani definitely has a power-packed author-backed role to commit to.

(The above story first appeared on LatestLY on Mar 21, 2021 03:18 PM IST. For more news and updates on politics, world, sports, entertainment and lifestyle, log on to our website latestly.com).