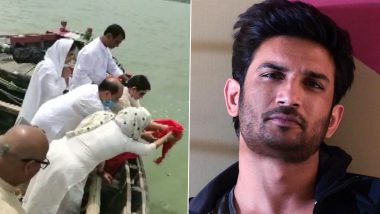 Bollywood actor Sushant Singh Rajput died by suicide on June 14, 2020. The actor made his debut into the world of glitz and glam with Ekta Kapoor's melodramatic serial, Pavitra Rishta. His death sent shock waves in the industry and fans as well as industry wallahs mourned the loss. His last rites were performed in Mumbai. However, the actor's family wanted to give him a happy farewell and so his ashes were supposed to get immersed in river Ganga on June 18, 2020. And as reported by ANI, the family of the star have performed the ritual and have immersed his ashes into the holy river in Patna. Sushant Singh Rajput Wanted To Send Kids To NASA As A Part Of His Project 151 Initiative.

On Thursday, Sushant's sister Shweta Singh Kirti wrote on Facebook: "Reached my Patna's home safely yesterday. Thanks to everyone who was praying and who helped in the process. It was hassle-free. Today we will be doing Asthi Visarjan (ashes immersion) for Bhai. I again want to ask all to pray for him and send him off with all the fond memories and unconditional love in your hearts. Let's celebrate his life and give him a very loving and happy farewell." May his soul rest in peace. Sushant Singh Rajput Cleared All Payments Of His Staff Three Days Before His Demise.

Check Out The Photos Below:

Bihar: Family of actor #SushantSinghRajput immersed his ashes in river Ganga in Patna today. He died by suicide at his residence in Mumbai's Bandra on June 14. pic.twitter.com/Heo6wrrJIQ

For the unversed, Sushant was found dead at his Bandra residence on Sunday. Shweta, who is the actor's US-based sister arrived to the city after his demise. Sushant's last outing as an actor was in Netflix's Drive, Chhichhore and Sonchiriya. However, fans will get to see him soon in his upcoming Dil Bechara, whose release was postponed due to coronavirus lockdown. Stay tuned!

(The above story first appeared on LatestLY on Jun 18, 2020 03:30 PM IST. For more news and updates on politics, world, sports, entertainment and lifestyle, log on to our website latestly.com).