Actor Boman Irani took to social media on Tuesday to mourn the demise of former batsman Yashpal Sharma, a member of the 1983 World Cup-winning India team. Sharma passed away on Tuesday at the age of 66 in Noida. 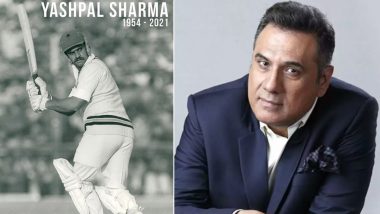 Actor Boman Irani took to social media on Tuesday to mourn the demise of former batsman Yashpal Sharma, a member of the 1983 World Cup-winning India team. Sharma passed away on Tuesday at the age of 66 in Noida. Sharing a throwback black and white photograph of the late cricketer in action on the field, Irani posted on Instagram: "A Titian, a Team man, a Tiger. Those flaming eyes after hitting those sixes in the 83 semis represented a new attitude in Indian cricket. Keep roaring Yashpalji. Wherever your gaze may take you. We remain an indebted nation! #YashpalSharma." Yashpal Sharma Passes Away: ’83 Star Ranveer Singh Mourns The Demise of Former Indian Cricketer (View Post).

Irani is part of the cast of Kabir Khan's upcoming sports drama "83", a film based on India's first cricket World Cup win in 1983 under the captaincy of Kapil Dev. The actor plays Farokh Engineer in the film. Earlier in the day, actor Jatin Sarna, who plays the role of Yashpal Sharma in the sports drama, had mourned the former cricketer's demise. Yashpal Sharma Passes Away! Jatin Sarna Who Plays The World Cup Hero In 83 The Film Mourns The Loss Saying ‘This Is Not Done Sir’.

Taking to Instagram, the actor wrote: "This is not done sir, no not fair and god you too not fair. Yashpal sir can't believe, you cannot leave so soon abhi toh paari baaki thi (the innings was not over yet), Abhi toh mulakaat baaki thi aapke ghar aana tha milne mujhe, Saath mai film dekhni thi aapke, aapke expression dekhne thae.. Yash paah yash paah karke chillana tha sabne sabko pata chalna tha kon hai ye sher, sir.... (our meeting was pending, I had to visit your place, we had to watch the film together and see your reactions.. shout out your name and tell the world who you are) @yashpalsharmacricketer you will be remembered, History will never forget you #83thefilm."

(The above story first appeared on LatestLY on Jul 13, 2021 07:07 PM IST. For more news and updates on politics, world, sports, entertainment and lifestyle, log on to our website latestly.com).