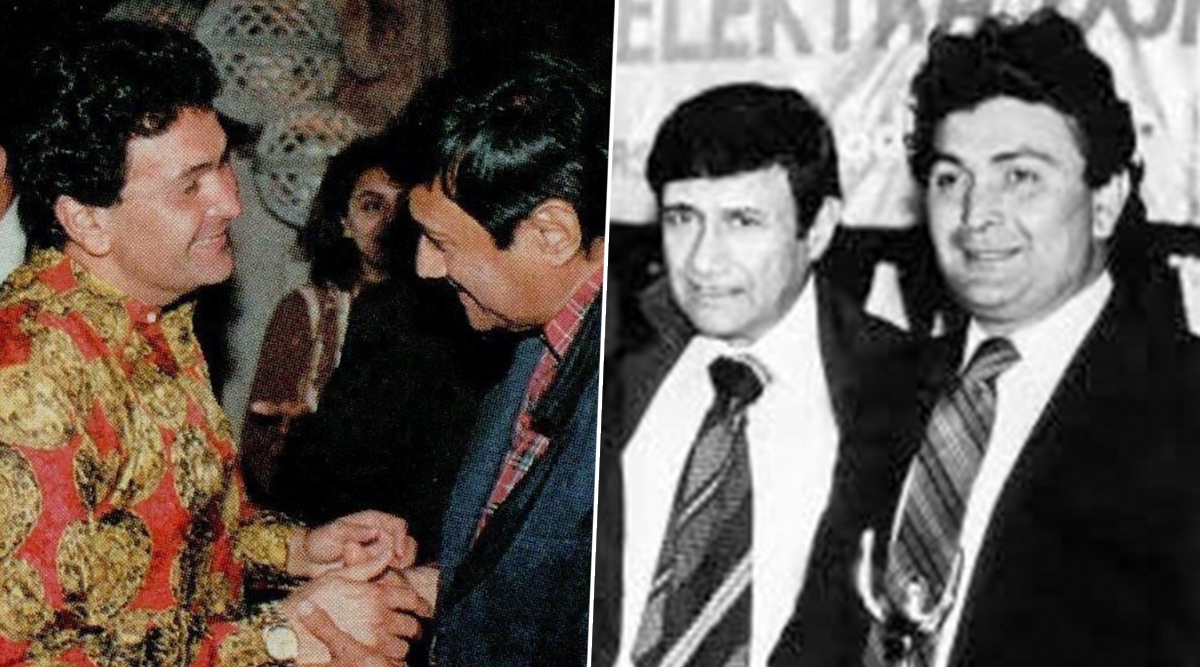 Bollywood veteran Rishi Kapoor paid rich tributes to legendary star Dev Anand on his 96th birth anniversary on Thursday. The actor shared a series of throwback pictures on his Twitter handle and penned an emotional message while recalling the moments spent with the 'Gregory Peck of India.' In the monochrome snaps, the 'Chandni' actor is posing with the late icon. Pagalpanti Director Anees Bazmee Acted as a Child Actor in Amitabh Bachchan, Rishi Kapoor’s Naseeb (View Pic).

Rishi took a walk down the memory lane and shared one of his encounters with the ace actor at a party just after the release of his 1973 film Bobby."Salute to the evergreen star Dev Anand Sahab on his 97th Birthday. Never a style Icon and a young at heart like him. Just after Bobby's release (1973) he told me at Stardust magazine's party "We youngsters should do a film together" Such was his confidence. God Bless you sir!" he tweeted. Alia Bhatt Joins Boyfriend Ranbir Kapoor As They Host A Homecoming Party For Rishi Kapoor – View Pics.

The legend who was born on September 26, 1923, was considered as one of the greatest and most successful actors in the Bollywood film industry. In a career spanning almost six decades, the actor has managed to create a mark on the industry with his roles in films like Guide, Taxi Driver, Jewel Thief and CID. He broke new grounds, playing a smuggler in 'Jaal,' absconding gang member in 'Dushman,' black marketeer in 'Kalabazaar' and a murderer in 'Bombay Ka Babu.'

While maintaining a dark image, he even acquired a romantic persona with films like 'Manzil' and 'Tere Ghar Ke Samne' with Nutan, 'Kinaare Kinaare' with Meena Kumari, 'Maya' with Mala Sinha and many more. He was also a recipient of Dadasaheb Phalke Award which was conferred on him in 2002. The Padma Bhushan actor died in London at the age of 88 on December 3, 2011, due to cardiac arrest.