Riya Sen Birthday Special: 5 Music Videos Of The Actress That Will Always Be Our Favourites

Riya Sen celebrates her birthday today and to celebrate it with her, we have listed four of her biggest music video hits that redefined the non-film music scene back in the 90s. Interestingly, she got much better roles to play in these videos than her movies. 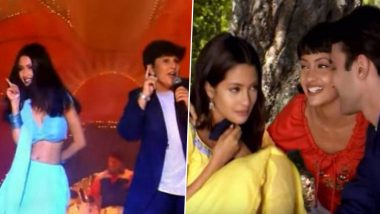 This was the 90s when non-film music was a bigger rage than the Bollywood ones. So much so that many popular singers were roped in for film songs. Those were the best days of our lives, that's something we can vouch for. One of the first times we saw our birthday girl Riya Sen was in Falguni Pathak's wildly famous music video Yaad Piya Ki Aane Lagi. In a blue lehenga choli, she looked extremely pretty and sweet. Since then, we have watched her in several of these music videos who were all popular. Pati Patni Aur Woh: Riya Sen Says Her Upcoming MX Player Series Is a Perfect Mix of Humour and Love

So we thought on Riya Sen's birthday, we would rather talk about her amazing music videos from the 90s which are still in vogue. She did branch out to movies by mid-2000s, she is still known as the music video girl as she did quite a few of them. So let's rewind...

Everyone who was a teenager in the 90s, this song was all about first love, first crush, first feelings and so many more firsts. Riya was all of 16 when she was featured in the song. Many had designed a similar lehenga choli in the same colour after the song became crazy famous.

This was also the time when old songs from the 50s or 60s were remade with western arrangements. Some were incredibly good, at times even better than the original, no offense to the musicians of that era. Riya looked smoking hot in this particular number sung by Asha Bhosle.

Jagjit Singh and Asha Bhosle's mesmerising combo in this lilting romantic melody is one of our favourite music videos. Riya Sen played dual characters on the lines of Kajol's twin role in Dushman. So you have a naive and innocent girl and also a fiery woman.

Yet another heartwarming melody by the late Jagjit Singh had Asha Bhosle had a disfigured Riya staying away from the love of her life.

Sonu Nigam was one of the firsts who made music videos a rage back in the 90s. Riya Sen has been part of one of his gems and looks spectacular in the song.

Riya Sen has done many movies and commercials, but she will always be our favourite music video girl forever.

(The above story first appeared on LatestLY on Jan 24, 2021 08:10 AM IST. For more news and updates on politics, world, sports, entertainment and lifestyle, log on to our website latestly.com).