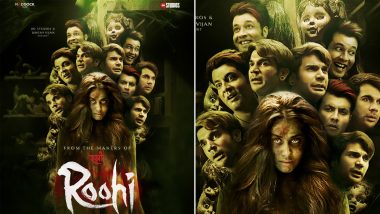 Bollywood actors Janhvi Kapoor and Rajkummar Rao's recently-released horror-comedy film Roohi, which had opened to mixed responses, witnessed a slow uprise in its fourth-day collection. The film, which also stars Varun Sharma, minted a total of Rs 3.85 crores on the fourth day of its release, witnessing a 0.79 per cent uprise from the opening day. The horror-comedy had earned Rs 3.06 crores on its first day. Roohi Box Office Collection Day 3: Janhvi Kapoor, Rajkummar Rao and Varun Sharma’s Movie Rake In RS 3.42 Crore.

Meanwhile, on the second day of its release, it witnessed a drop of 25 per cent from the first day. It garnered Rs 2.25 crores on its second day. While on the third day, it witnessed an uprise of 1.17 crores from the second day. It garnered 3.42 crores on the third day. Film critic and movie trade analyst Taran Adarsh confirmed the same on Twitter on Monday. Roohi Box Office Collection Day 2: Janhvi Kapoor, Rajkummar Rao and Varun Sharma’s Movie Earns RS 2.25 Crore.

'Roohi' which was previously called 'Rooh Afza' and then 'Roohi Afzana', was initially slated to hit the theatres in the first week of June, last year. However, due to the ongoing coronavirus pandemic, the makers had to postpone the release date. A Jio Studios Presentation, 'Roohi' is produced by Dinesh Vijan and Mrighdeep Singh Lamba. The film marks the first-ever collaboration of Rajkummar and Janhvi. Rajkummar and Varun have earlier shared screen space in the 2015 release 'Dolly Ki Doli'.

The horror-comedy also become the first film to arrive in theatres after the Ministry of Information and Broadcasting allowed cinema halls nationwide to operate at full capacity from February 1 with COVID-19 safety protocols put in place. The film is based on the lines of the 2018 hit film 'Stree', which featured Shraddha Kapoor and Rajkummar Rao in lead roles.