The film has been getting mixed reviews from the audience but they are making sure they are watching the film in theatres, considering the fact that the theatres have opened after a whole year. 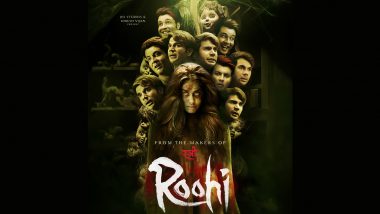 Roohi starring Janhvi Kapoor, Rajkummar Rao and Varun Sharma is running successfully in theatres since March 11. On the first day of its release, the film raked in a business of Rs 3.06 crore and had a great kickstart at the box office. On day 2, the film showed slow growth and only managed to collect  Rs 2.25 Crore for itself. But with the weekend kicked in, it was expected that the film will earn more than the second day and that's exactly what happened. The film made a business of Rs 3.42 Crore on the third day. Roohi Box Office Collection Day 1: Janhvi Kapoor, Rajkummar Rao and Varun Sharma's Movie Earns Rs 3.06 Crore on Its Opening Day.

The film has been getting mixed reviews from the audience but they are making sure they are watching the film in theatres, considering the fact that the theatres have opened after a whole year. The upward trend seen in Roohi's business proves that it is successfully managing to draw the audience to the theatres and receiving love for itself. The total business of Roohi now stands at a total of Rs 8.73 Crore nett in India.

Helmed by Hardik Mehta, the movie is the first major Bollywood release post the COVID-19 lockdown. With the COVID cases witnessing an uptick and several restrictions put in place, it is safe to say that the film has done decent business. Roohi which was previously called Rooh Afza and then Roohi Afzana and it was initially slated to hit the theatres in the first week of June, last year. Due to the ongoing coronavirus pandemic, the makers had to postpone the release date. Roohi Box Office Collection Day 2: Janhvi Kapoor, Rajkummar Rao and Varun Sharma’s Movie Earns RS 2.25 Crore.

Roohi is produced by Dinesh Vijan and Mrighdeep Singh Lamba and presented by Jio Studios. The film marks the first-ever collaboration of Rajkummar and Janhvi. Rajkummar and Varun have earlier shared screen space in the 2015 release Dolly Ki Doli. The film is based on the lines of the 2018 hit film Stree, which featured Shraddha Kapoor and Rajkummar Rao in lead roles.

(The above story first appeared on LatestLY on Mar 14, 2021 12:16 PM IST. For more news and updates on politics, world, sports, entertainment and lifestyle, log on to our website latestly.com).