The upcoming horror-comedy will also become the first film to arrive in theatres after the Ministry of Information and Broadcasting allowed cinema halls nationwide to operate at full capacity from February 1. 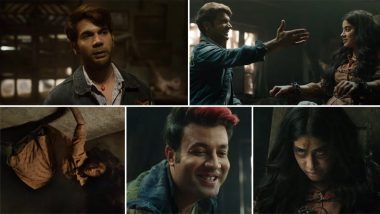 By now we all know that Rajkummar Rao, Janhvi Kapoor, Varun Sharma starrer Roohi tells a story of a ghost who abducts brides on their honeymoon. The film is based on the lines of the 2018 hit film Stree which featured Shraddha Kapoor and Rajkummar in lead roles. The makers have been keeping up the excitement for the film by sharing the promos and posters of the film and now finally have unveiled the trailer of Roohi as well. Yes, the wait is over as the trailer of the horror-comedy takes you for a fun ride. Roohi: Janhvi Kapoor and Rajkummar Rao Starrer To Release on the Big Screens, Here’s What The Exhibitors Have To Say!

The trailer begins with a voice which states that there is a witch who abducts brides right after they get married. We see a woman with twisted feet then walk into a hallway. We then see Rajkummar and Varun abducting Janhvi who later take her to a dilapidated building. It is then for the first time when we see Janhvi transform into a ghost. Rajkummar and Varun try to help Janhvi get rid of the ghost that's living inside her and how they do it, is a series of funny event that we get a glimpse of in the trailer.

Both Rajkummar Rao and Varun Sharma's characters look funny and their dialogue mixed with their hilarious acting is quite amusing to watch. Janhvi is raising the stakes here. This is the first time we will see her in such an avatar and going by the trailer, it looks like she will do a great job scaring the audience. The dialogues are on point and there isn't a single moment when you are not laughing while watching the trailer.

Check out the hilarious yet spooky trailer here:

Roohi, which is the first major Bollywood release post lockdown, was set to hit the cinemas in the first week of June last year, but the film had to be postponed due to the ongoing coronavirus pandemic. The upcoming horror-comedy will also become the first film to arrive in theatres after the Ministry of Information and Broadcasting allowed cinema halls nationwide to operate at full capacity from February 1 with COVID-19 safety protocols put in place. Roohi Posters: Janhvi Kapoor Gives Major Creepy Vibes While Rajkummar Rao and Varun Sharma Look Frightened by This Sight.

The film marks the first-ever collaboration of Rajkummar and Janhvi. Rajkummar and Varun have earlier shared screen space in 2015 release Dolly Ki Doli. The forthcoming horror-comedy is being helmed by Hardik Mehta. A Jio Studios Presentation, Roohi is being produced by Dinesh Vijan and Mrighdeep Singh Lamba. The film will hit the theatres on March 11, 2021.

(The above story first appeared on LatestLY on Feb 16, 2021 12:45 PM IST. For more news and updates on politics, world, sports, entertainment and lifestyle, log on to our website latestly.com).