Sharing two posters of the horror-comedy, the makers revealed that the trailer of the film will be out today at 12 PM. In one of the posters, we can see Rajkummar Rao and Varun Sharma dressed as grooms. Both the actors look frightened. 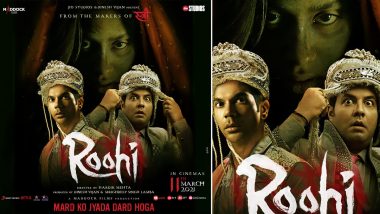 After a very long wait, the makers of Rajkummar Rao, Janhvi Kapoor and Varun Sharma starrer Roohi finally made the announcement of its release yesterday. The film has seen many alterations and is now all set to release in theatres soon. The makers shared a spooky promo video to announce the new title of the film and revealed that the trailer of the film will also be unveiled today. Hours before releasing the sneak peek, Maddock Films have shared a glimpse of what's to come next. Rajkummar Rao, Janhvi Kapoor’s Roohi Afzana Is Now ‘Roohi’, Makers Invite You To a ‘Horror Wedding’ on March 11.

Sharing two posters of the horror-comedy, the makers revealed that the trailer of the film will be out today at 12 PM. In one of the posters, we can see Rajkummar Rao and Varun Sharma dressed as grooms. Both the actors look frightened in the poster and makes us wonder what secret they have discovered about Janhvi. Janhvi's face also features in the back. Her face is dirty and her head is covered with a red cloth while she gives an angry look. In the other photo, Janhvi has gone in full 1920 mode with many faces of Varun and Rajkummar being scared for their lives. One can also see the tagline, "Mard Ko Jyada Dard Hoga" on the poster as well.

Check out the posters here:

Interestingly, Roohi will be the first Bollywood film starring A-listers to make to theatres after the COVID-19 infused lockdown. This will also revive the theatre business swiftly and exhibitors are elated and positive about the same. One of the exhibitors went on to say, "The Indian moviegoers are extremely passionate about enjoying brand new and high-quality content on the giant screen, which has been the norm for decades. We are glad that Jio Studios and Maddock Films are reinstating this belief, which augurs well for the entire film ecosystem in our country." Roohi: Janhvi Kapoor and Rajkummar Rao Starrer To Release on the Big Screens, Here’s What The Exhibitors Have To Say!

Roohi was initially scheduled to release in April 2020 and then shifted to June 5, 2020 release for certain reasons. After the pandemic hit the world, the makers decided to wait for things to come back to normal for them to release the films in theatres. Backed by Jio Studios and directed by Harik Mehta, the will hit the theatres on March 11, 2021.

(The above story first appeared on LatestLY on Feb 16, 2021 11:00 AM IST. For more news and updates on politics, world, sports, entertainment and lifestyle, log on to our website latestly.com).